In cooperation with the Chinelo Theater Bremen we developed the V1 of our Raummaschine and the piece Faszination Digital was created. The texturing of any objects or the background scenario is computer-generated and partially real-time.

The live rendering is adapted to the respective scenario and the stage for this purpose using Marker & MotionTracking. The semi-transparent L-pieces allowed a variety of physical space variations. These were again complemented by the mapping and the audio-visual contents by further levels of understanding. 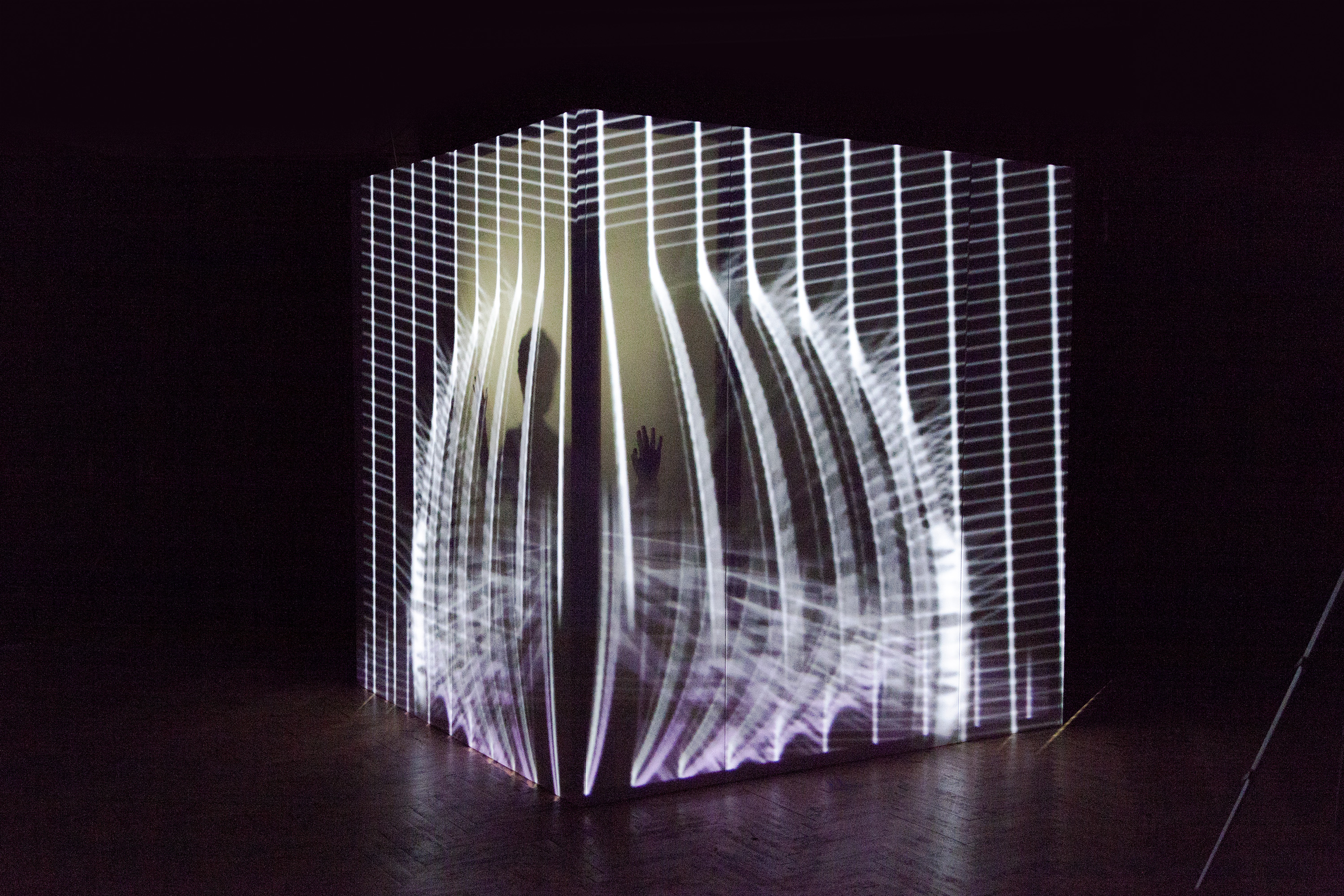 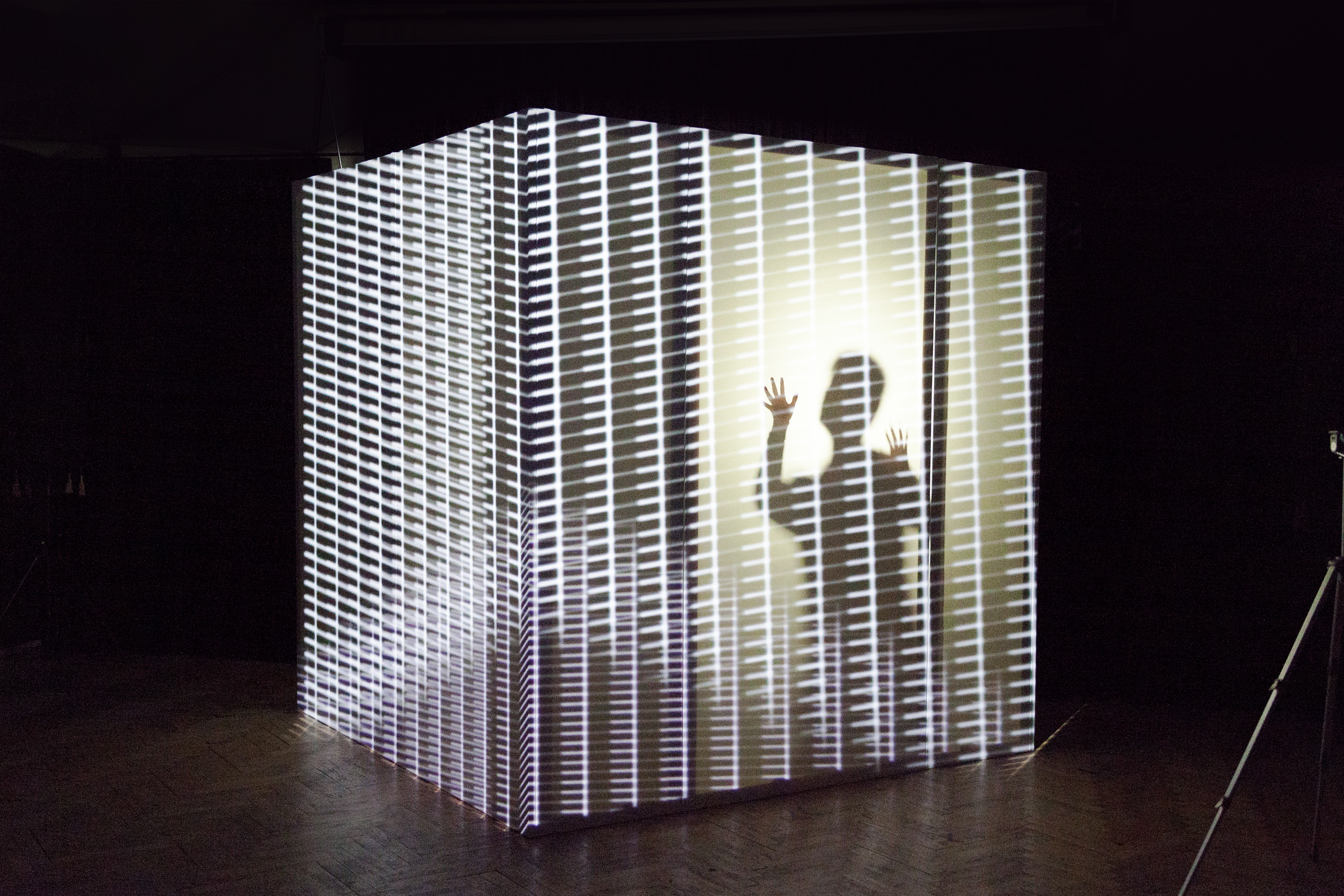 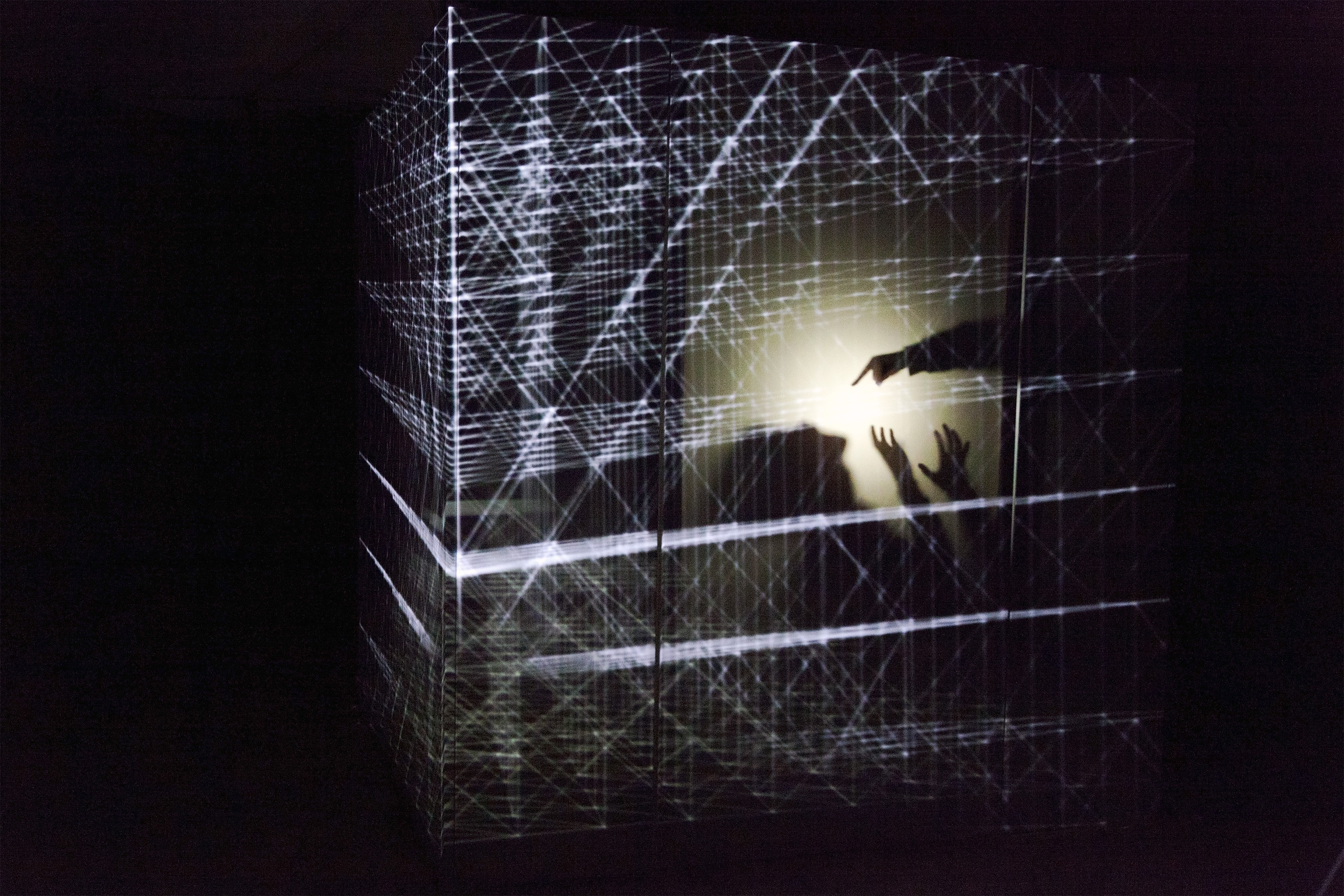 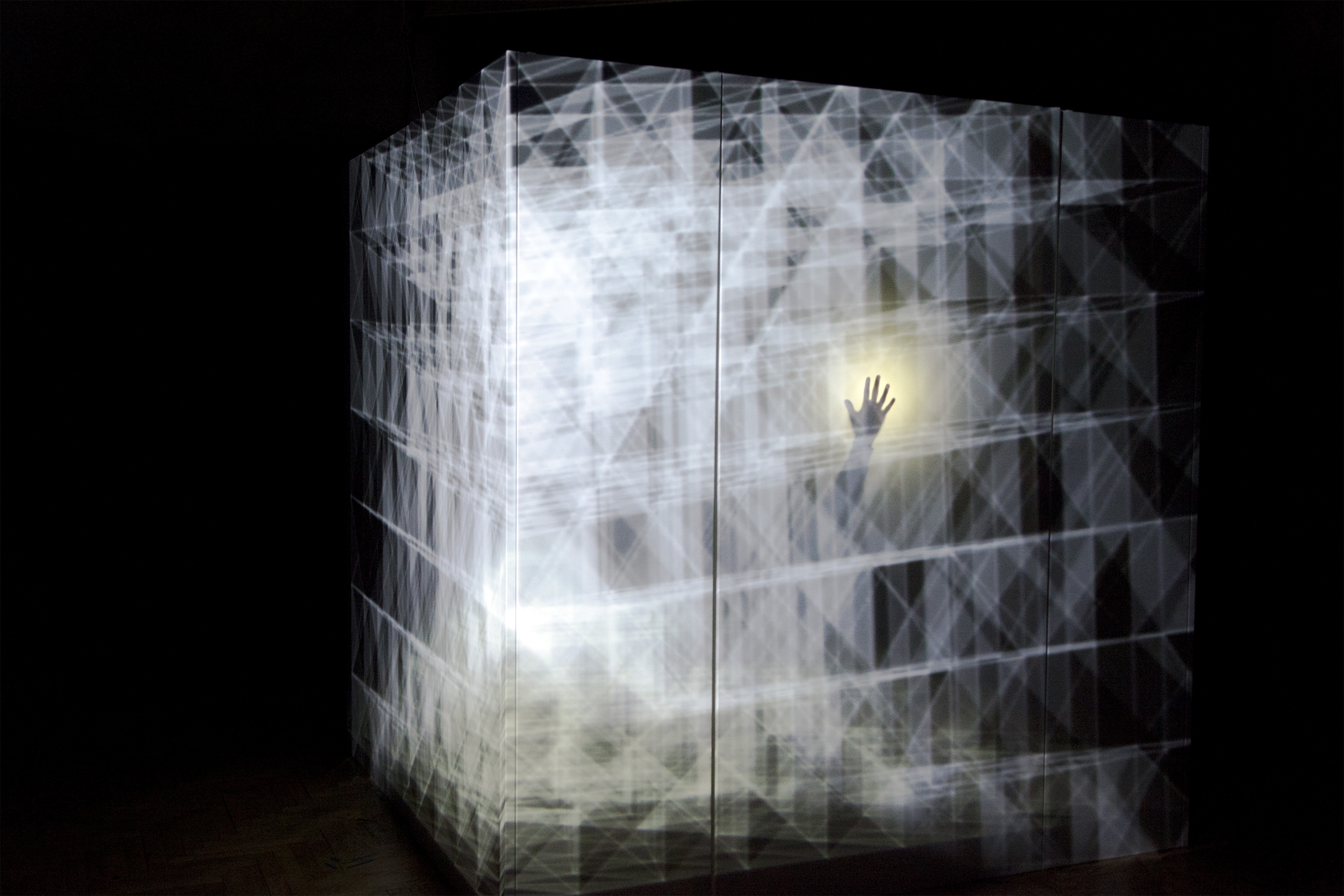 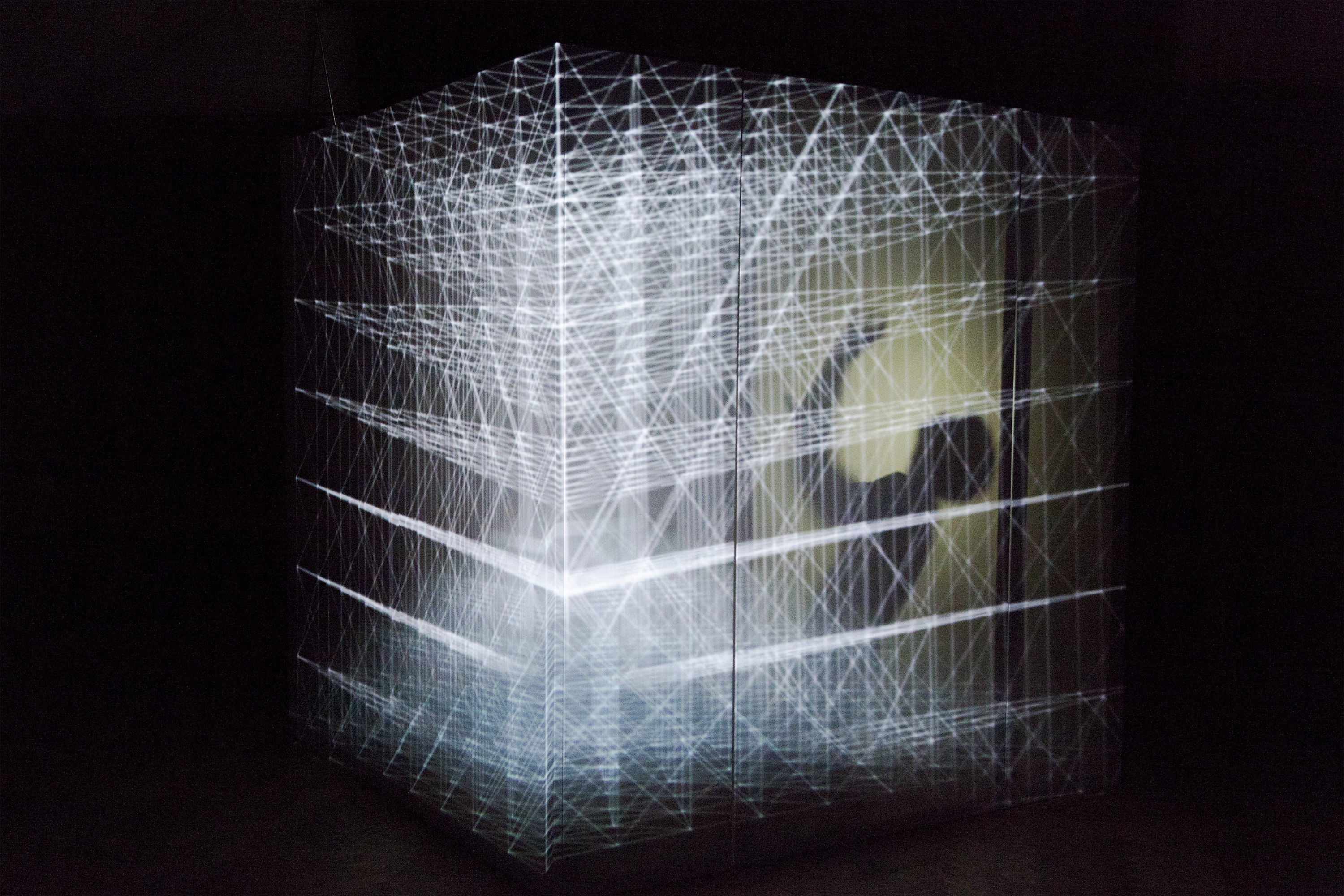 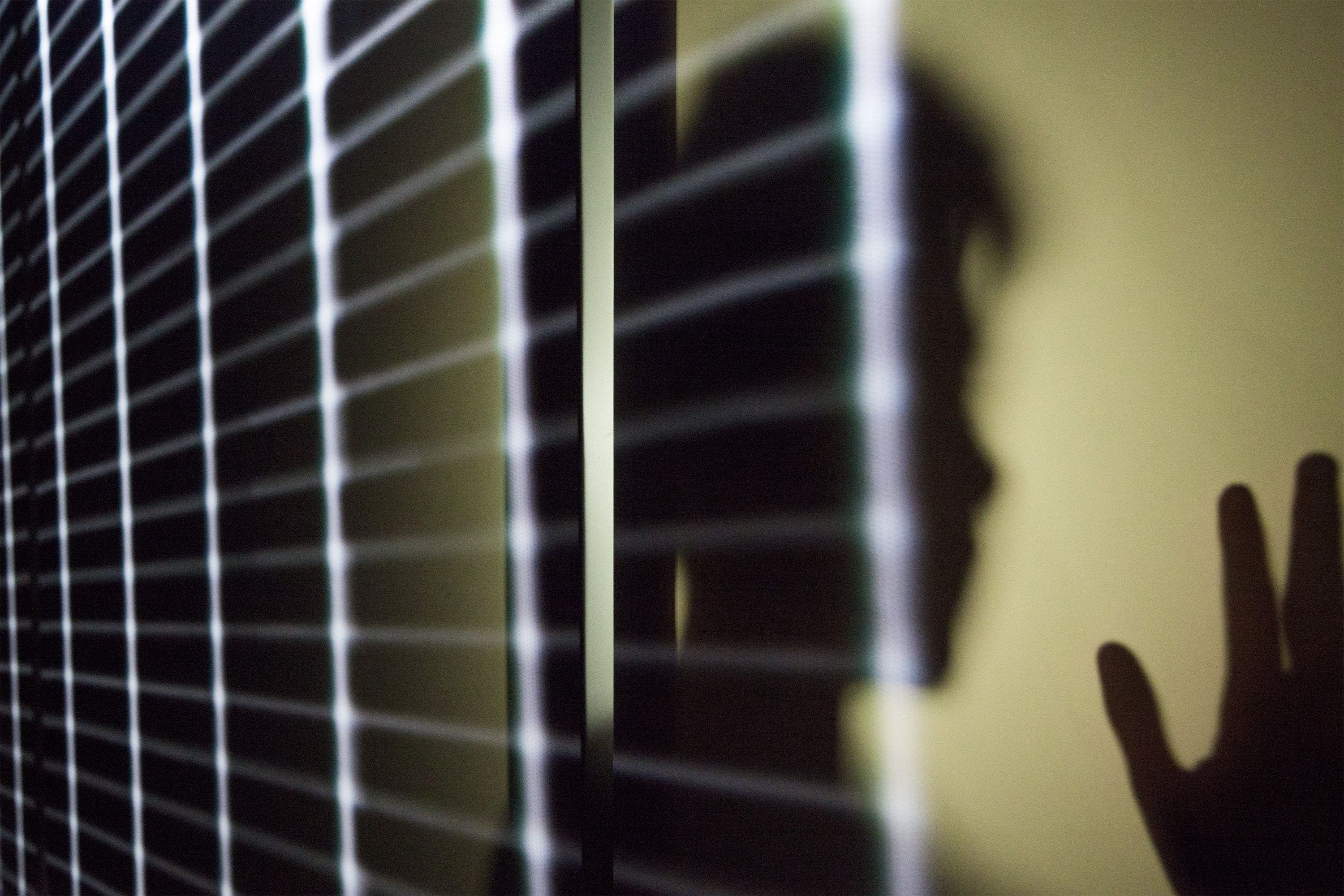 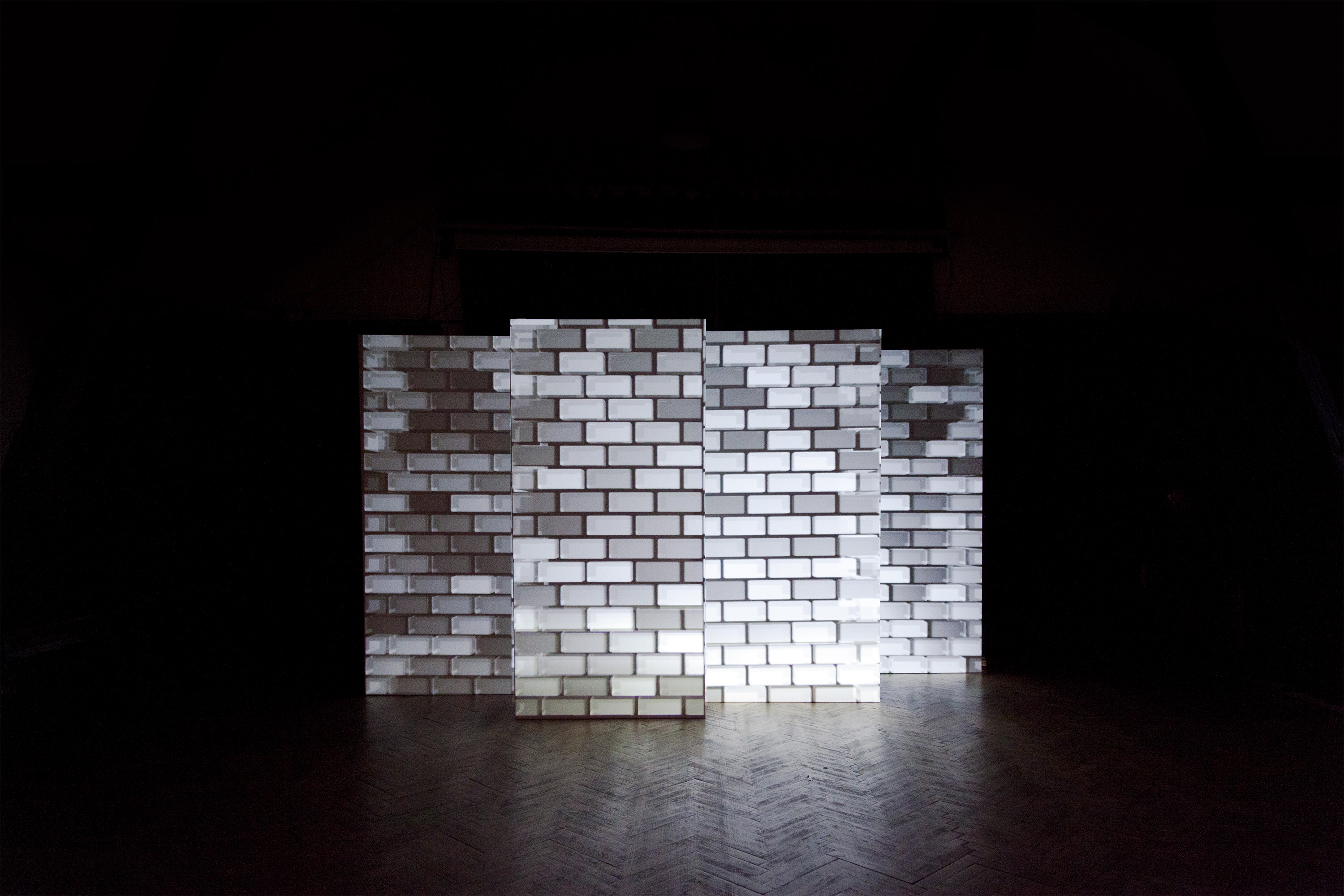 The spectator‘s spatial imagination is expanded by a synthesis between the physically existing space and artificial supplementation through the „Augmented reality“.

In the piece, we were mainly concerned with the functionality of the stage as a projection room and designed a variable but calculable stage and a system for the positioning of the elements in the individual scenes. These semitransparent L shaped elements could be freely positioned and made possible a plurality of convex or concave space variations. In the formal studies presented on the left, we attempted to manipulate the size ratios of the available space by segmenting into smaller spaces or delimited areas and to explore their spatial effect and emotion. In numerous workshops we determined the future functions that a mobile stage should perform. Through research and initial tests, the framework conditions were determined in consultation with the actors. The interaction of the actors with the objects and their mobility was the focus of the cooperative development. After the script was defined, the individual scenarios composed exclusively of the L pieces were composed. They sometimes form very compact, contiguous reliefs or free-standing fragmentations. The resultant individual spatial effect creates the basic mood of the scene.

The dramaturgical orientation can include, apart from an architectural local, a chronological space or a completely different context. Both the performer and the given background function as a projection surface, thus forming a new synthesis and a simultaneous paradox of background and foreground. 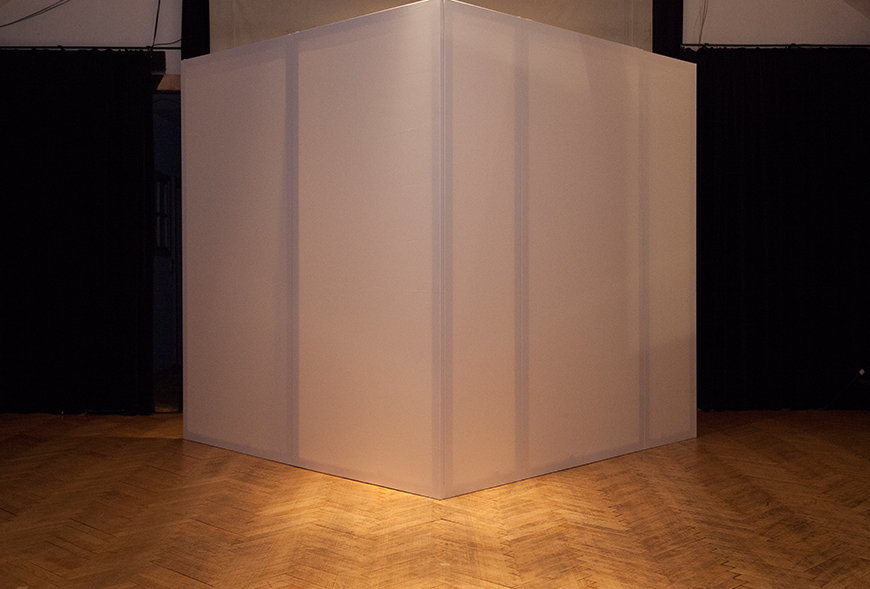 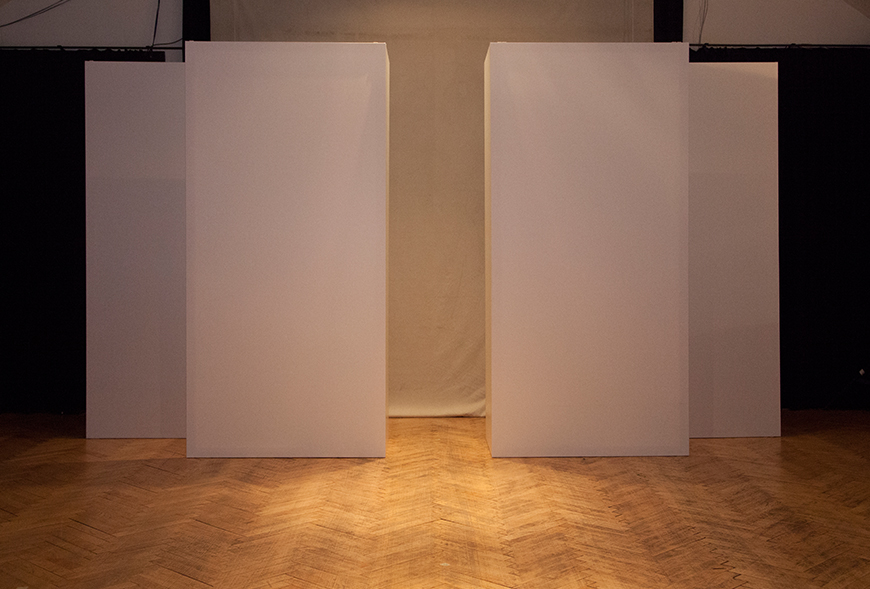 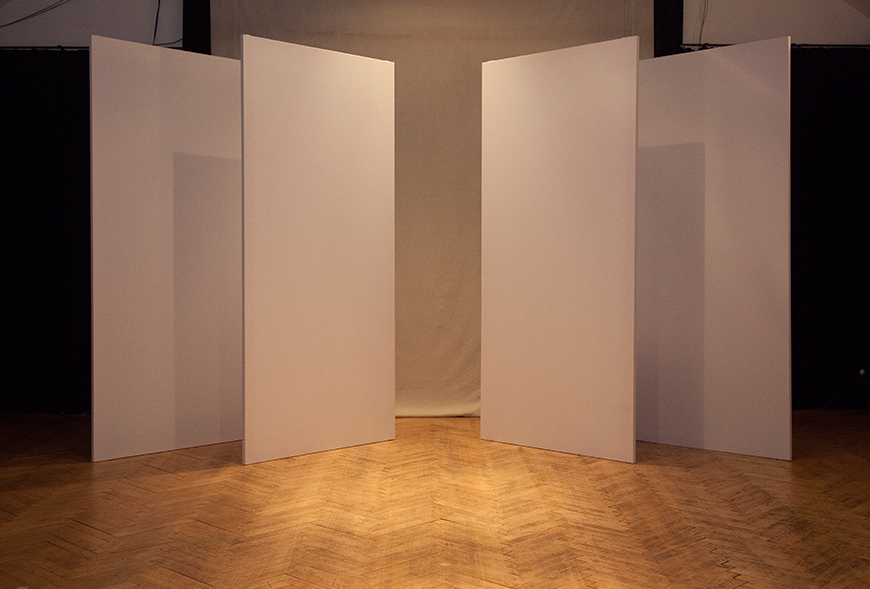 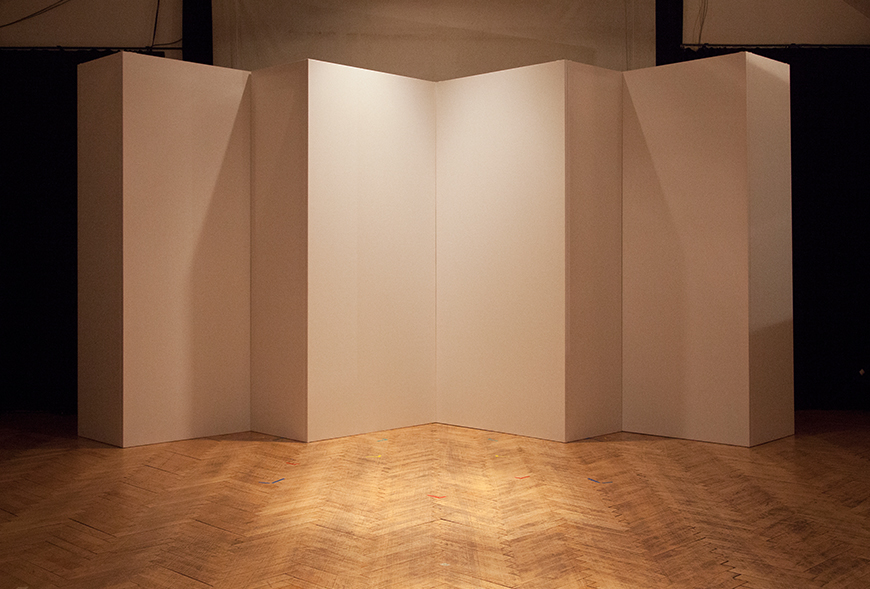 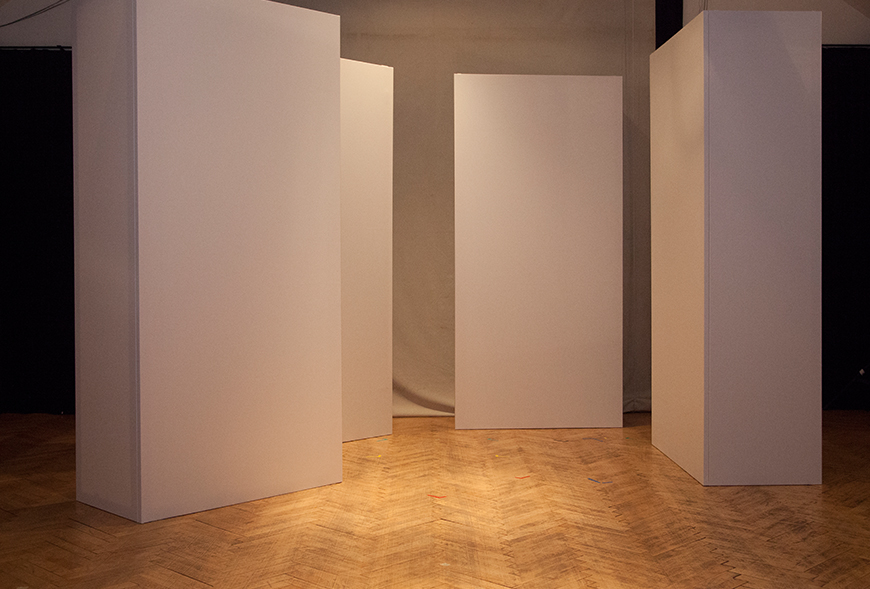 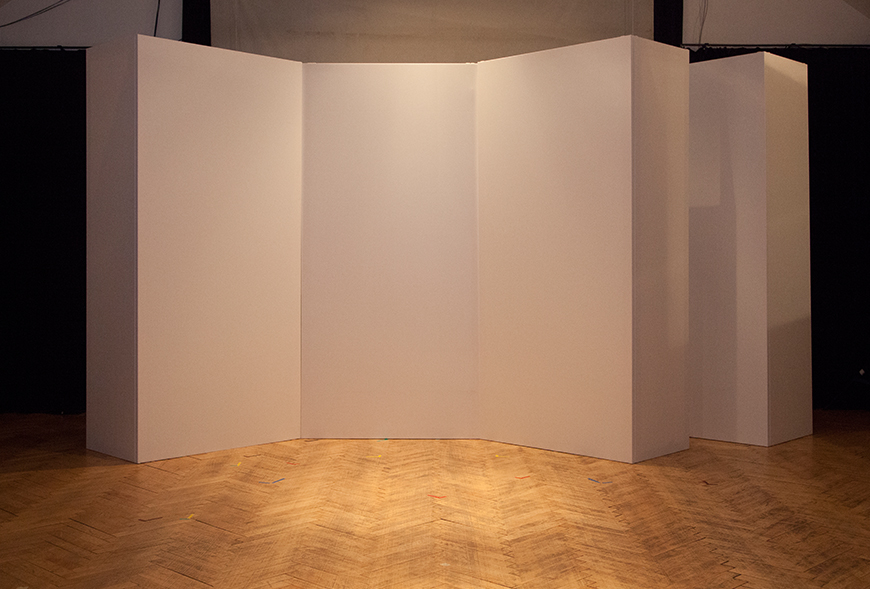 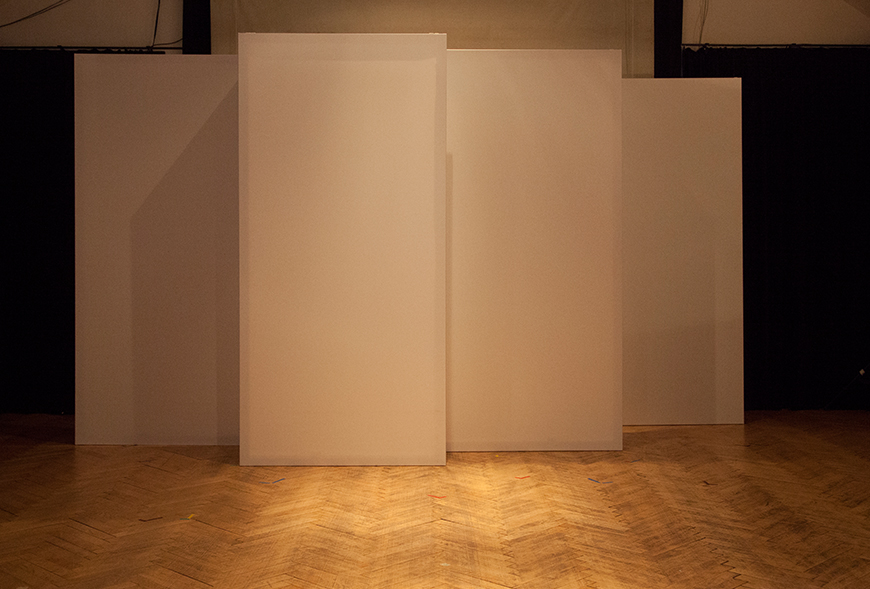 What makes the L-pieces so special in this case in relation to the software level is the property of being mobile, without deforming its outer shape. In addition, the form is easy to describe mathematically and can therefore be implemented quickly and intuitively as a 3D model / object without further background information or measurement data. Simplified geometry conserves the resources of the software and hardware and allows them to be redistributed to other areas of high-intensity computing. These 3D objects can serve as a visual orientation tool, just as the core files, but can also be used to create live effects. They expand the expression modality, especially with regard to virtual light and simulation of depth, but also provide practical solutions for rudimentary problems in the field of warping.

As can be seen in the example above, a virtual stage with all elements such as projector, Camera, and stage image as a three-dimensional image is created. This also makes it possible to have a a side view of the incident although the perspective of the viewer is actually designed frontally. Through the fixed position of the audience, an L piece represents a perspective full body without actually having a volume. We used this principle to allow a back projection on the elements. 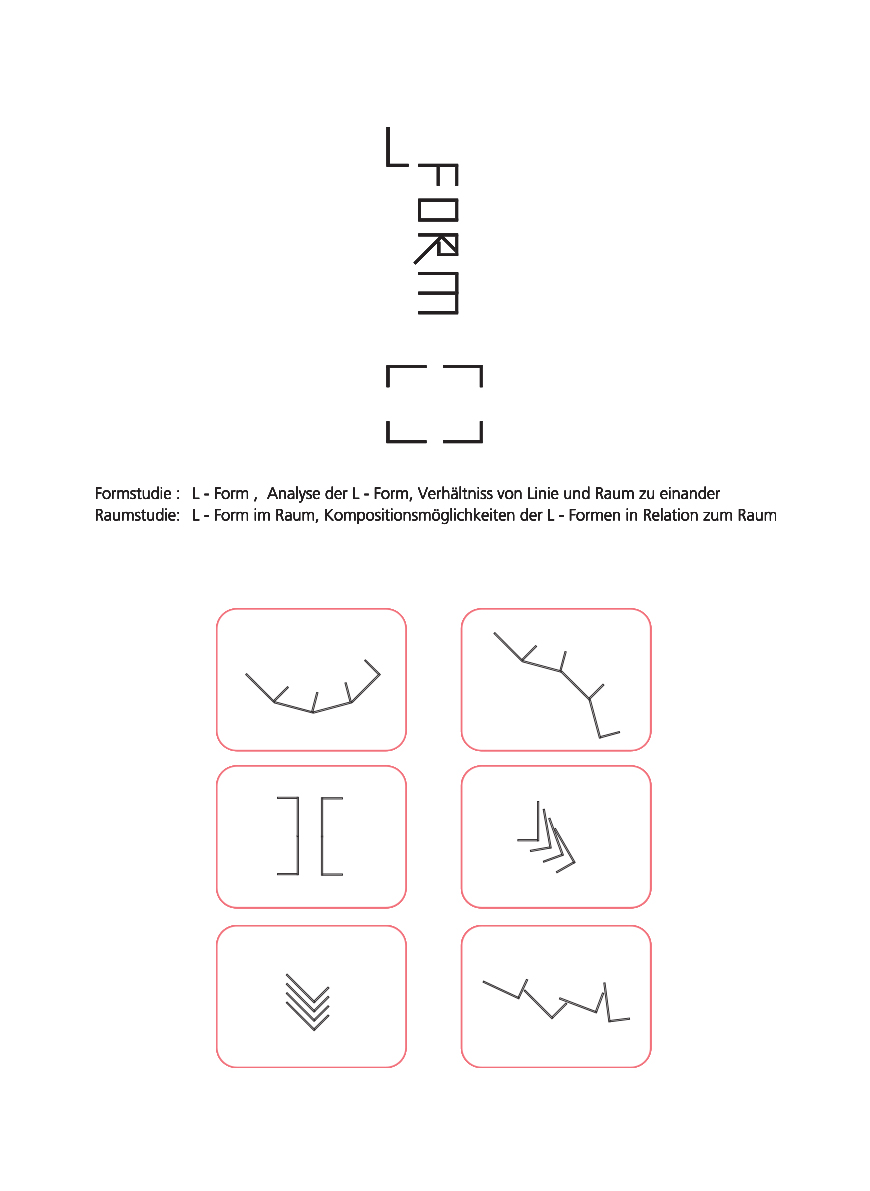 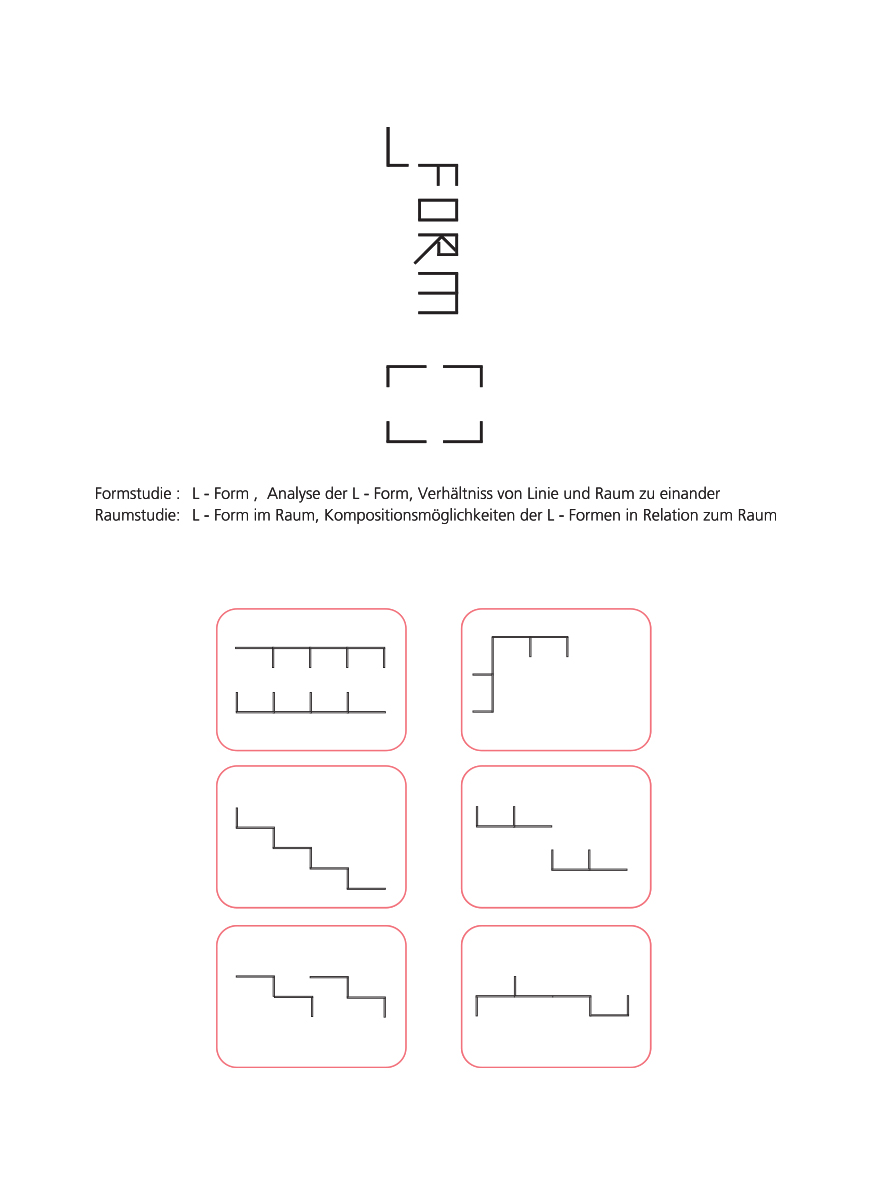 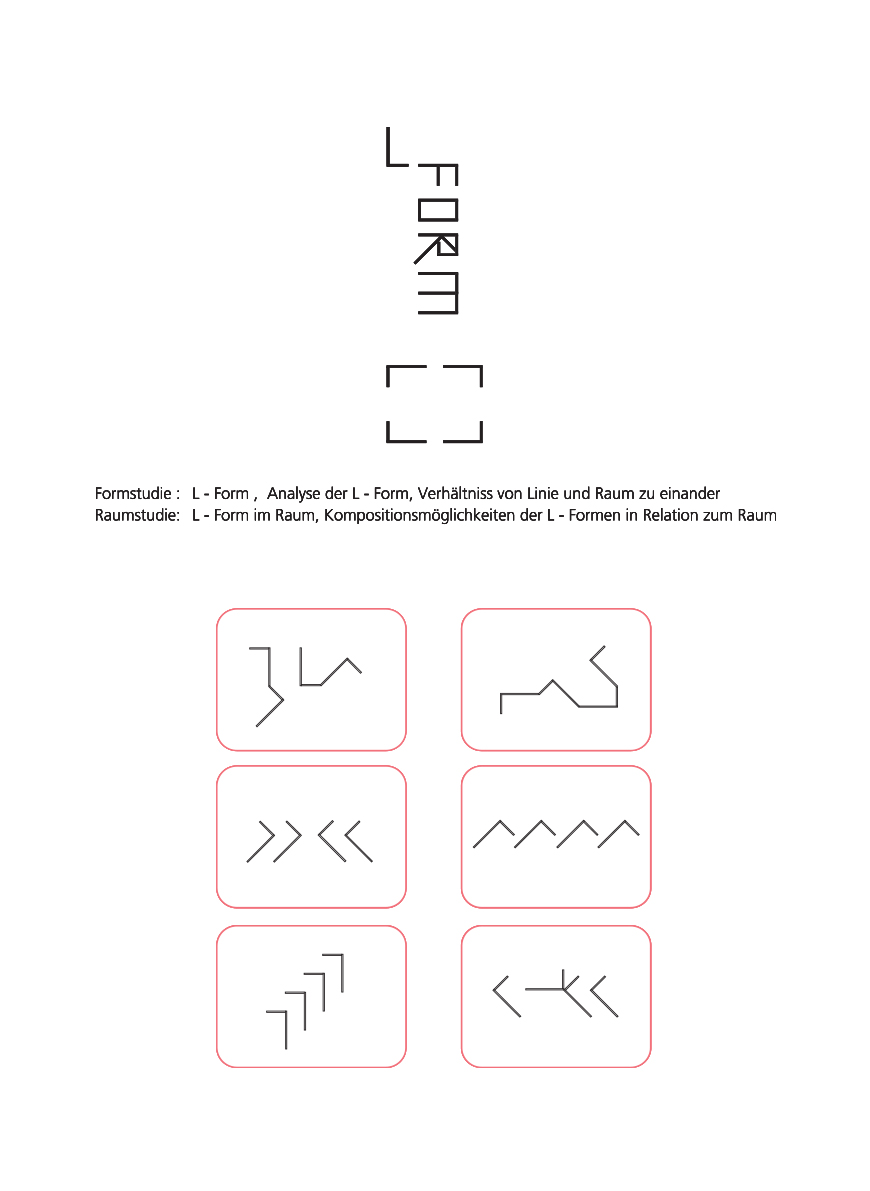