At the beginning of the eighteenth century the margrave Karl Wilhelm of Karlsruhe could not only realize a dream which he was supposed to have had on his hunt – his castle and with it the historical and cosmopolitan Karlsruhe could result in consequence.

An imaginary city, which unfolds itself around the castle as its center. A building that sends streets and alleys like sunrays, so that the view from above reveals a directional compass. This monumental symbolism, the historical circumstances and not least the surprisingly complex personality of Karl Wilhelm, are the main motif of the dream, a source of inspiration and inspiration for this work. 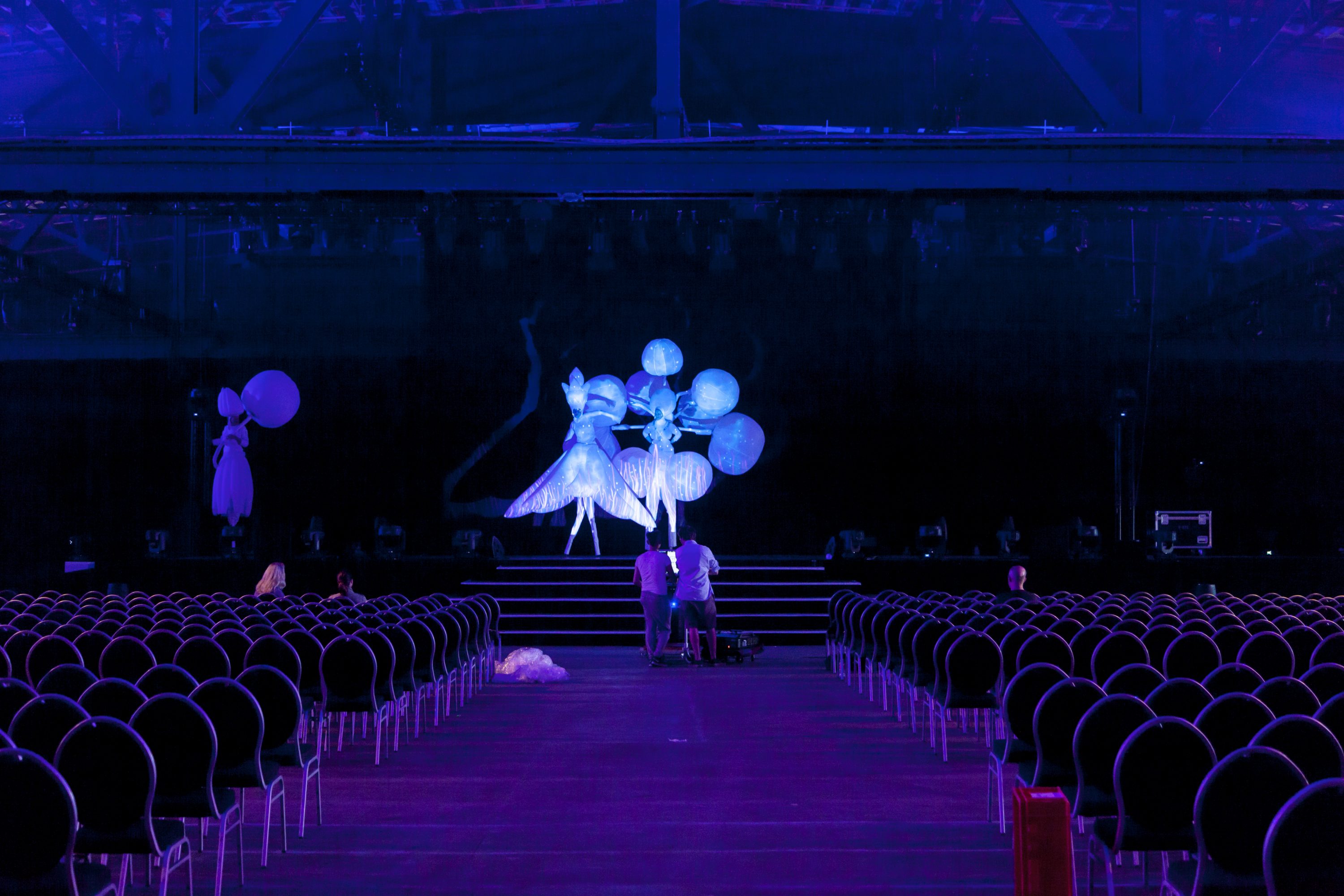 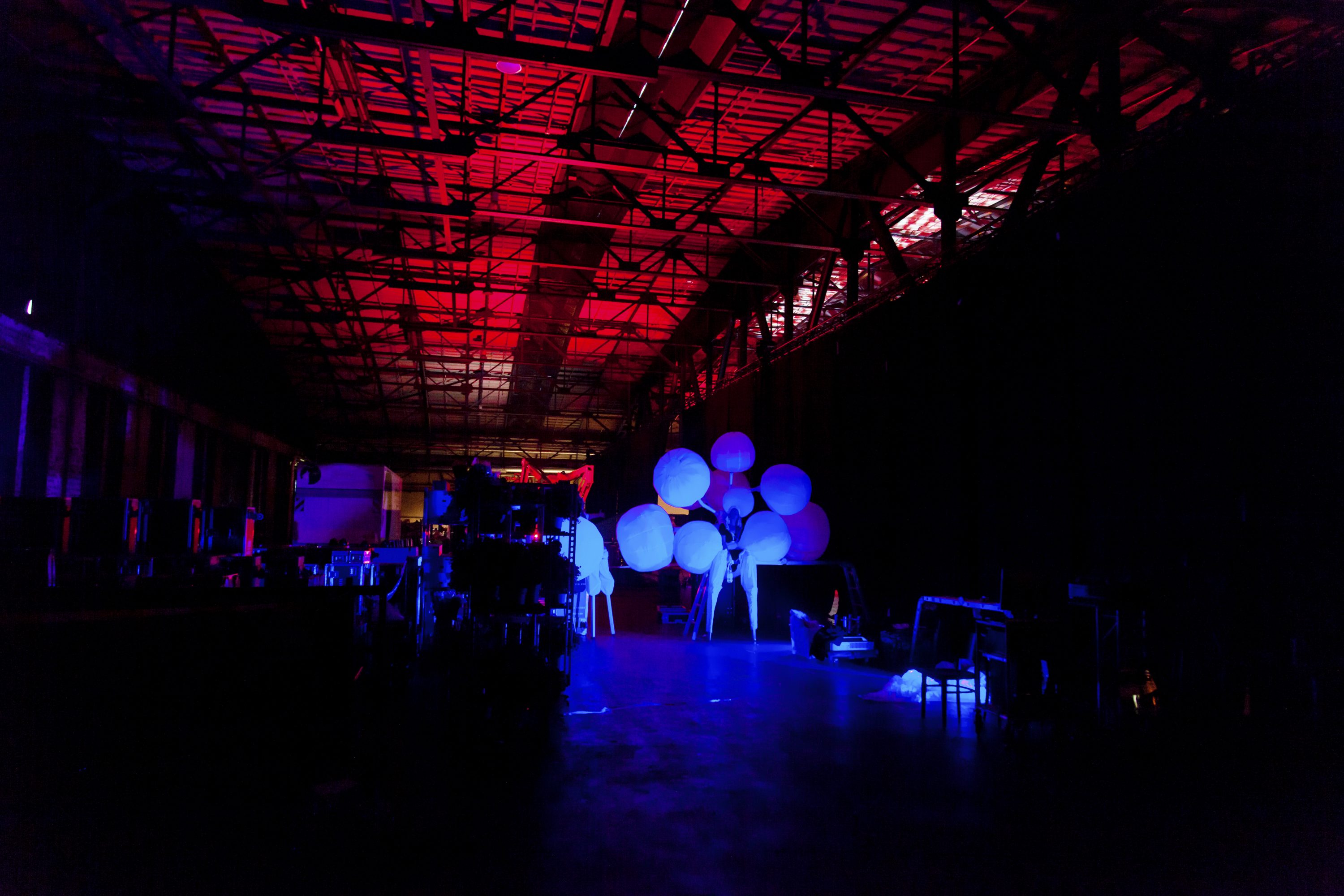 Imago Floris is an interactive projection Mapping performance with inflatable, Lighted costumes on stilts. As a cooperation project between Raummaschine, Urbanscreen, Stelzen-Art and Oakleaf, it is a further development of the Imago Caeli Show and was first shown at the Fleurop Interflora World Cup 2015 in Berlin. 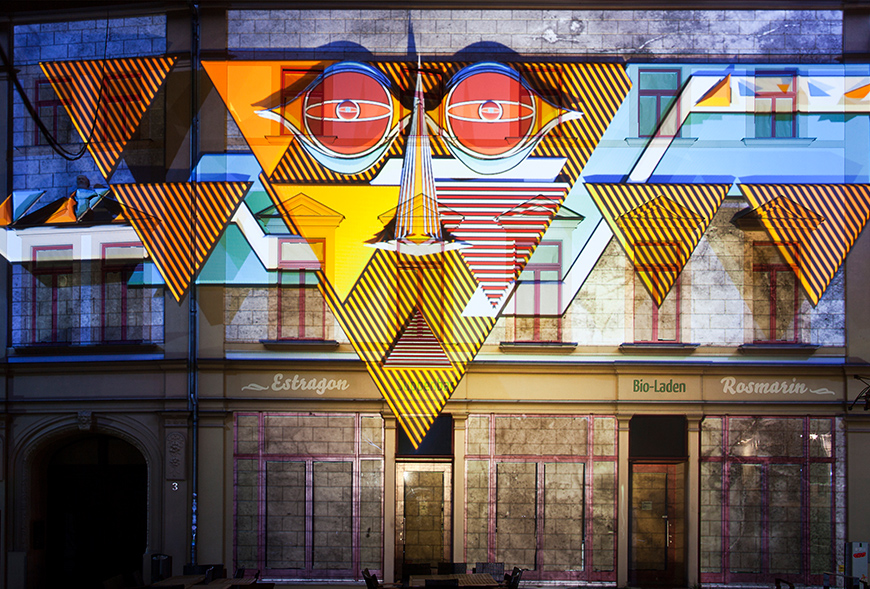 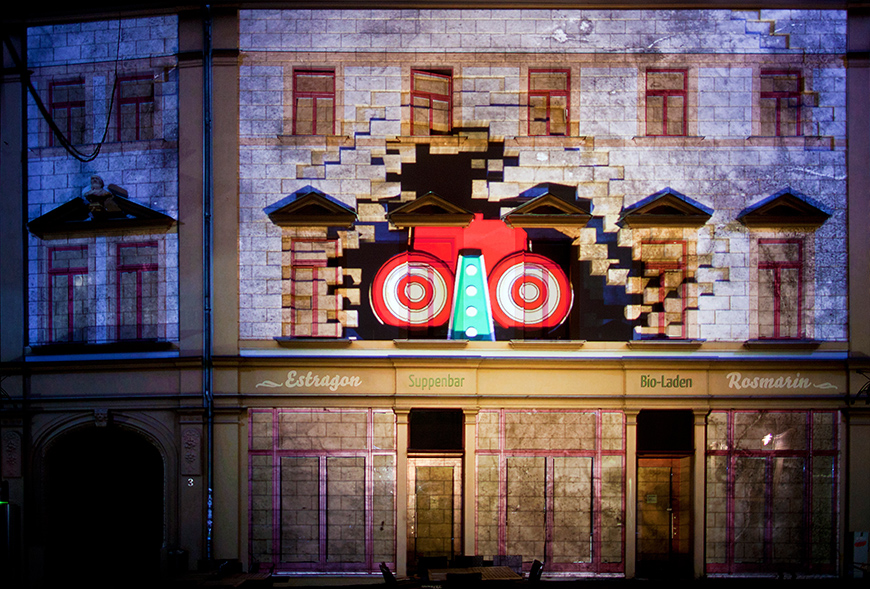 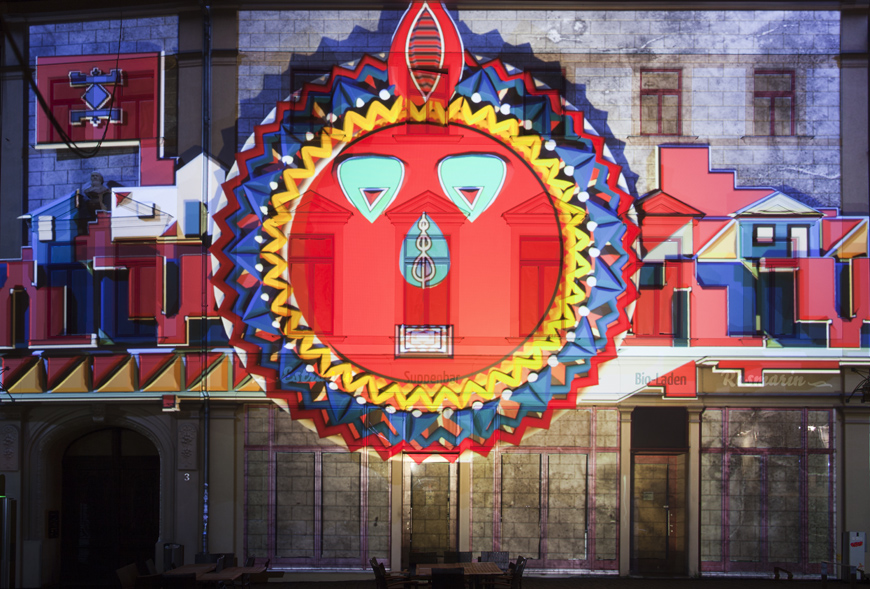 Nature shapes man. Man shapes nature. To be human means to be part of an environment, a culture and a timespirit.

Inspired by African house painting, our projection of cultural symbolism becomes a root-mask of an identity. This theory can be grasped on the basis of the comparison of Paul Krüger and Johann Gottfried Herder at Herderplatz 3 in Weimar. Herder‘s statue stands on Herderplatz, on the contrary the bust of Ohm Krüger on the summit, and is thus a clear positioning of the society for a permanent and solid equality of the people. 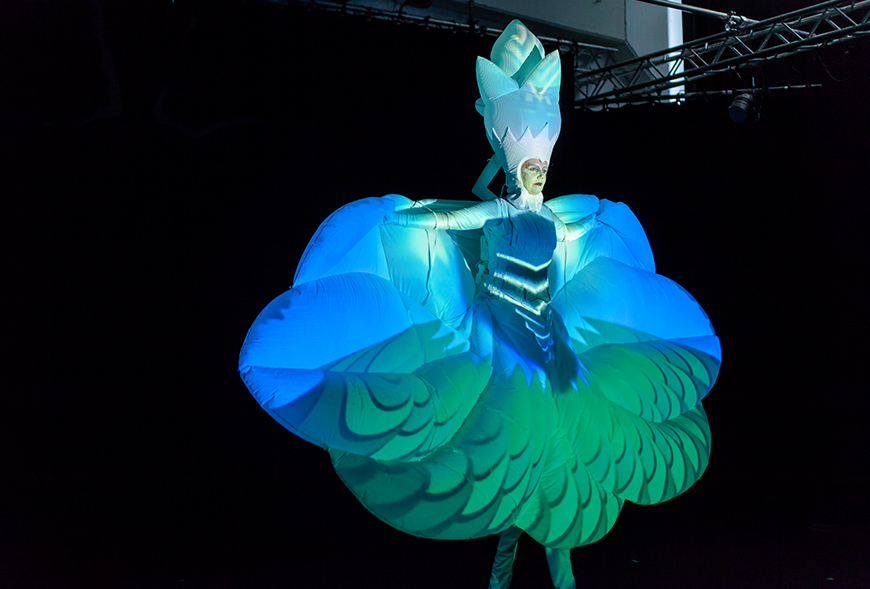 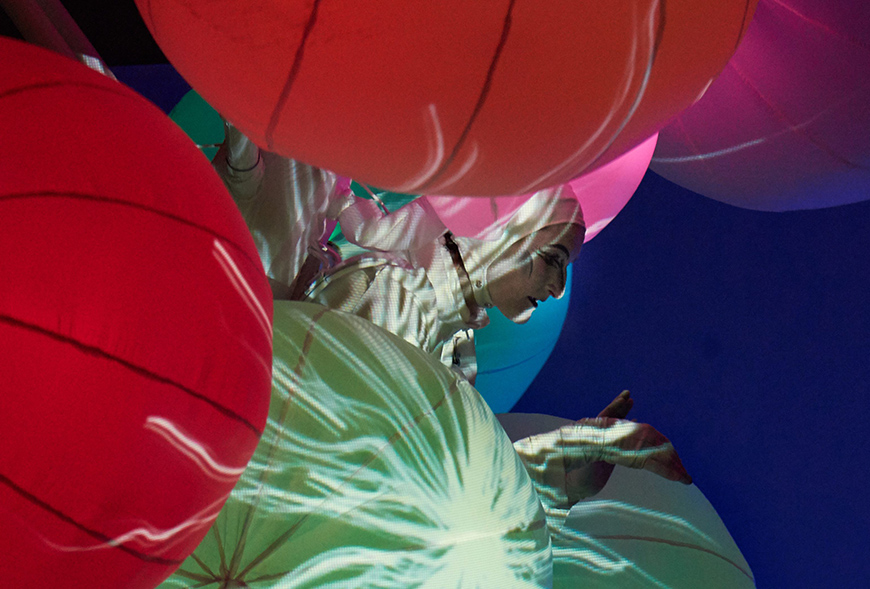 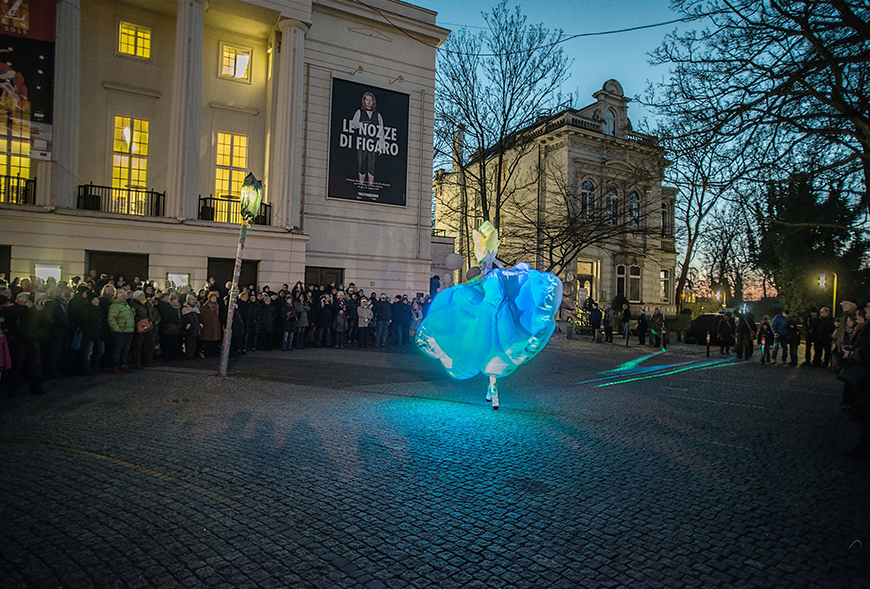 Imago Caeli is an interactive projection Mapping Street Performance with inflatable, lighted costumes on stilts. It was first shown at the Bremen Carnival in 2015 and is a cooperation project between Raummaschine, Xenorama, The Solar Nexus, Stelzen-Art and Oakleaf. 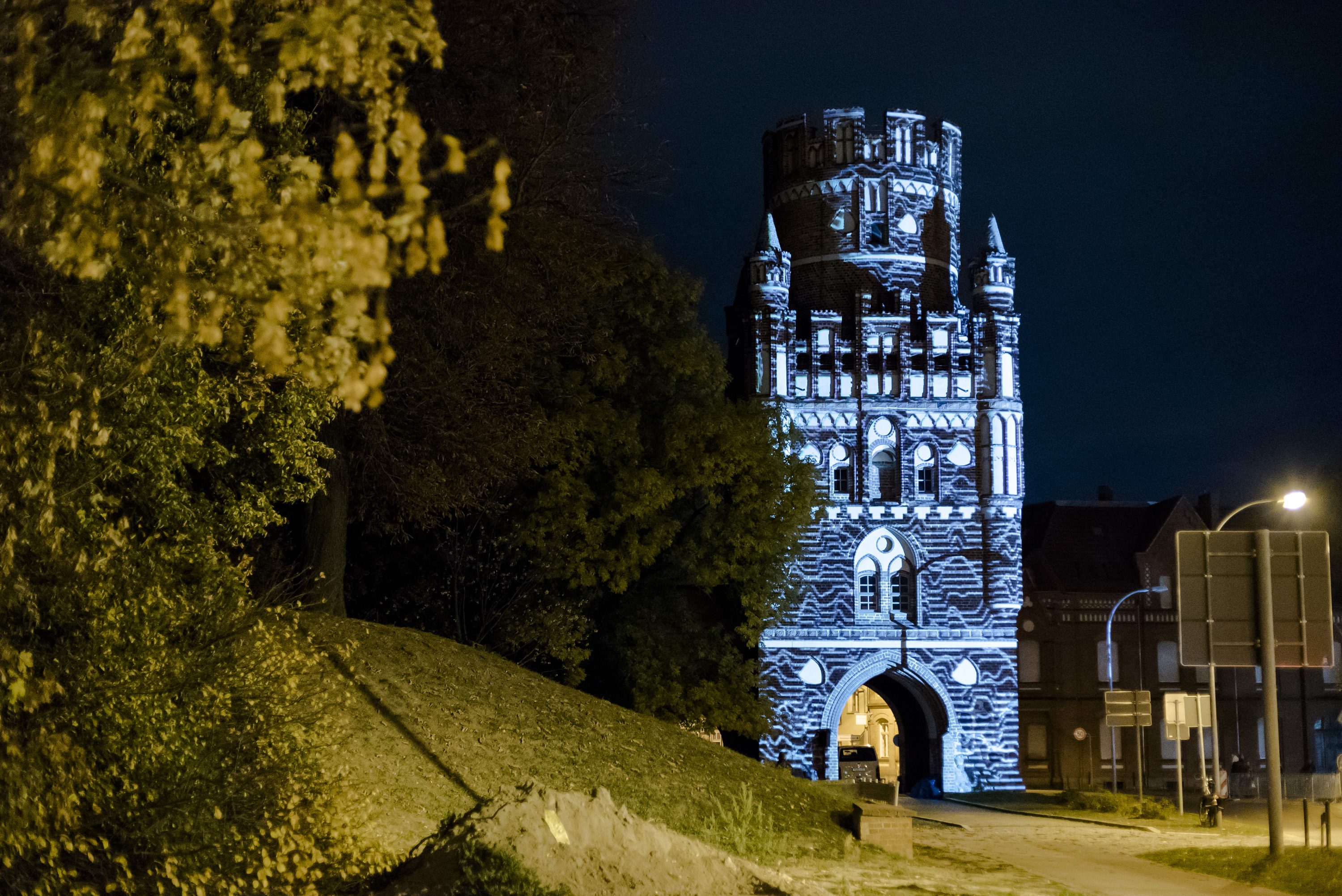 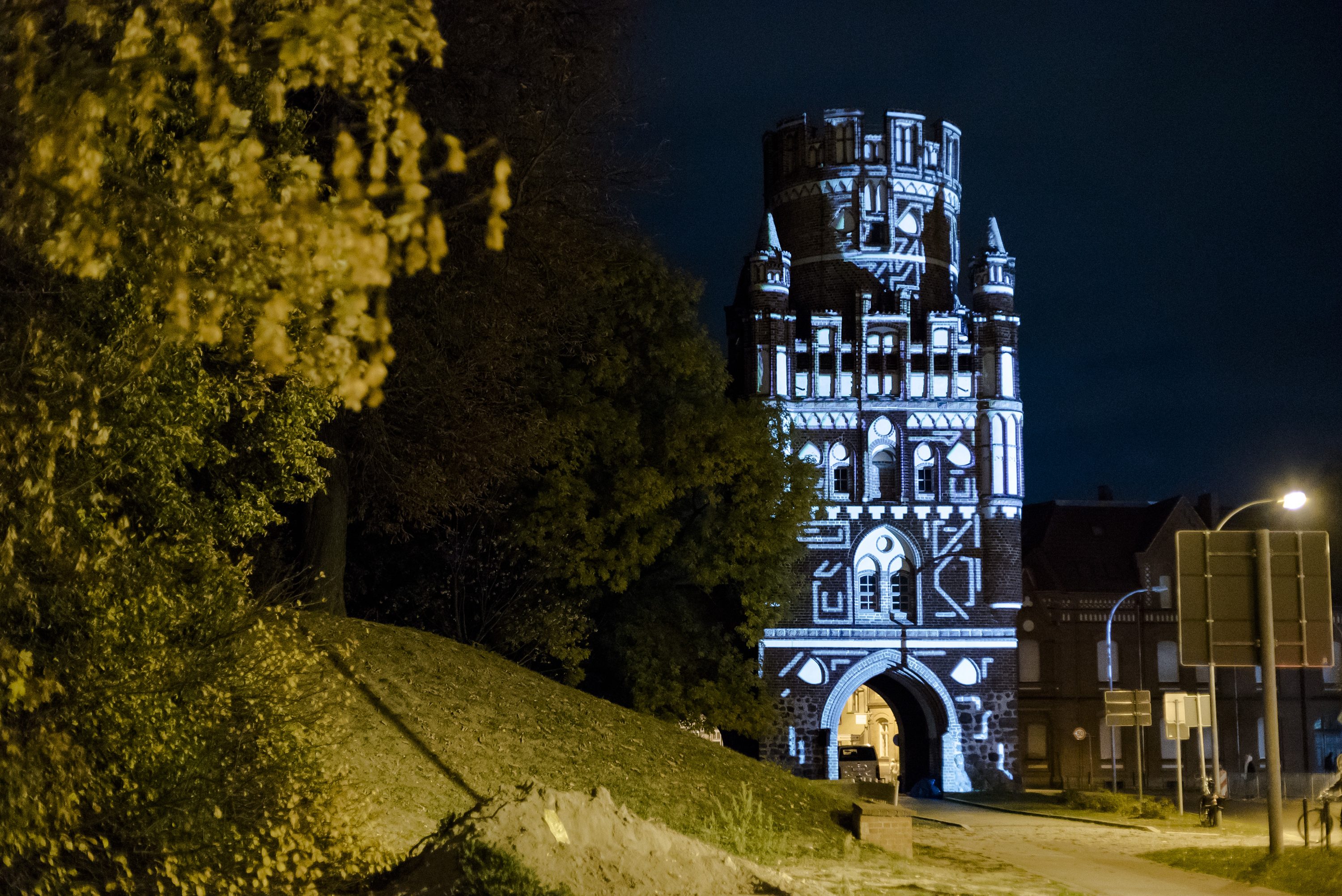 For the Stendaler Lichttage we realised a projection onto the Uenglinger Gate, in which light and sound merge into an immersive experience.The theme was the life of Johann Winckelmann, who is seen as the founder of modern archeology. In our projection, we imagined how Winckelmann described the Uenglinger Tor as one of the oldest and most beautiful gates in the country. 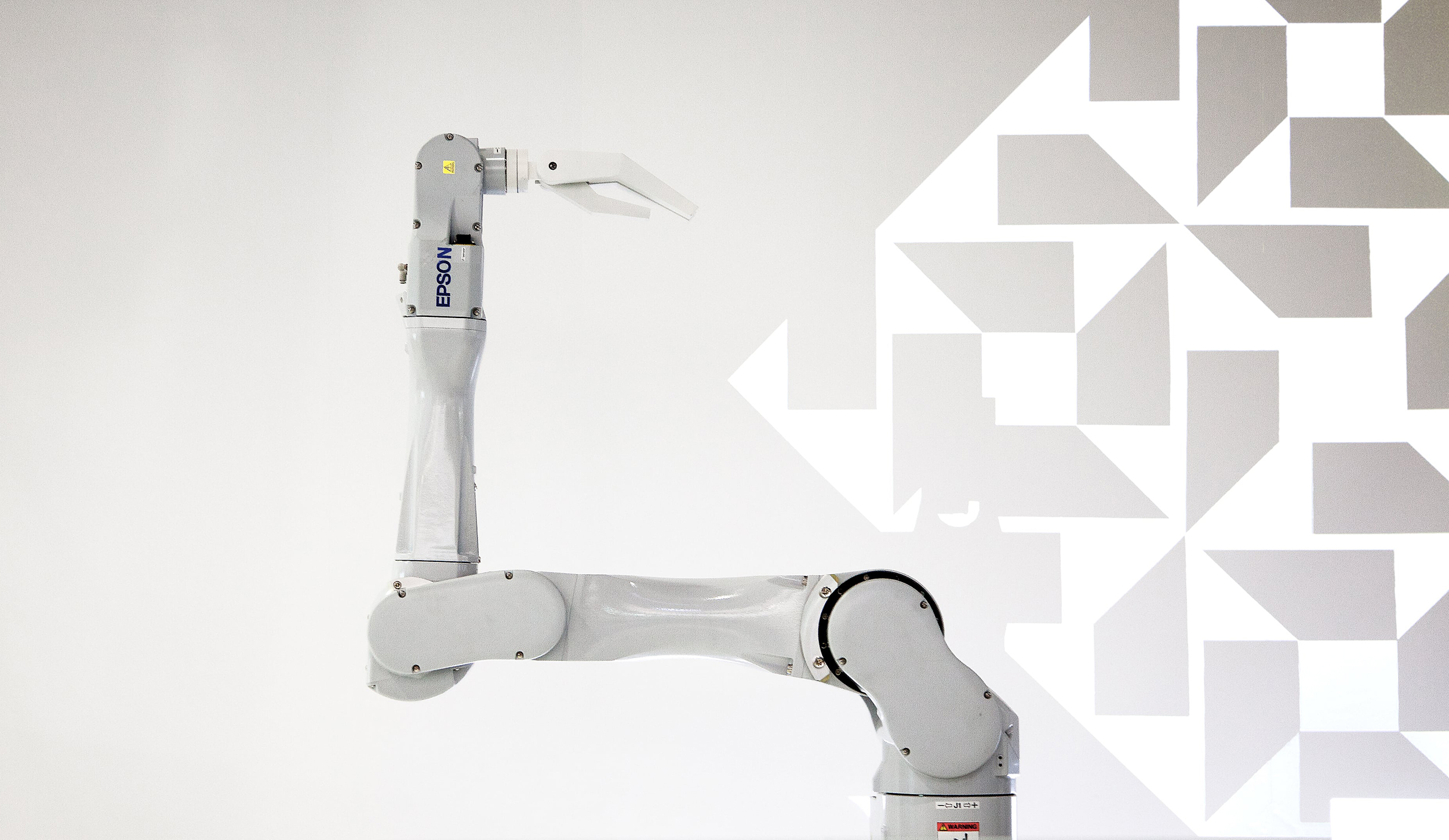 “ROBOTS” realized by URBANSCREEN and presented at CeBIT 2017 in Hannover is a moving piece following the question on how to develop an artistic approach to the choreography of a machine. 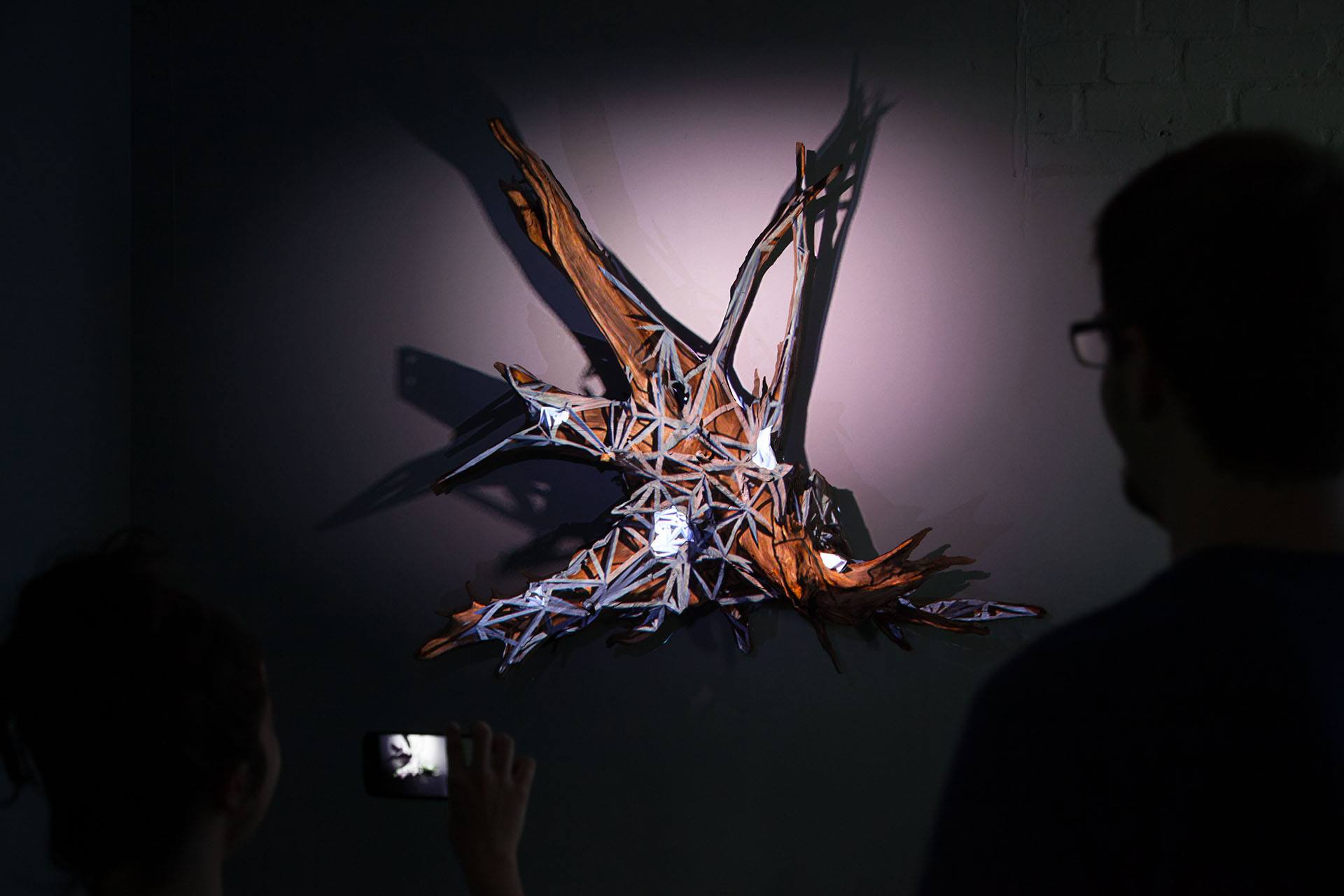 Radix is a light sculpture, which experiences a virtual expansion of the space through projection elements. It is a real tree root that is brought to life by means of light and sound. Enhanced and supported by 3D-printed elements, the sculpture performs a transformation from a natural organism to a – apparently – technical object. 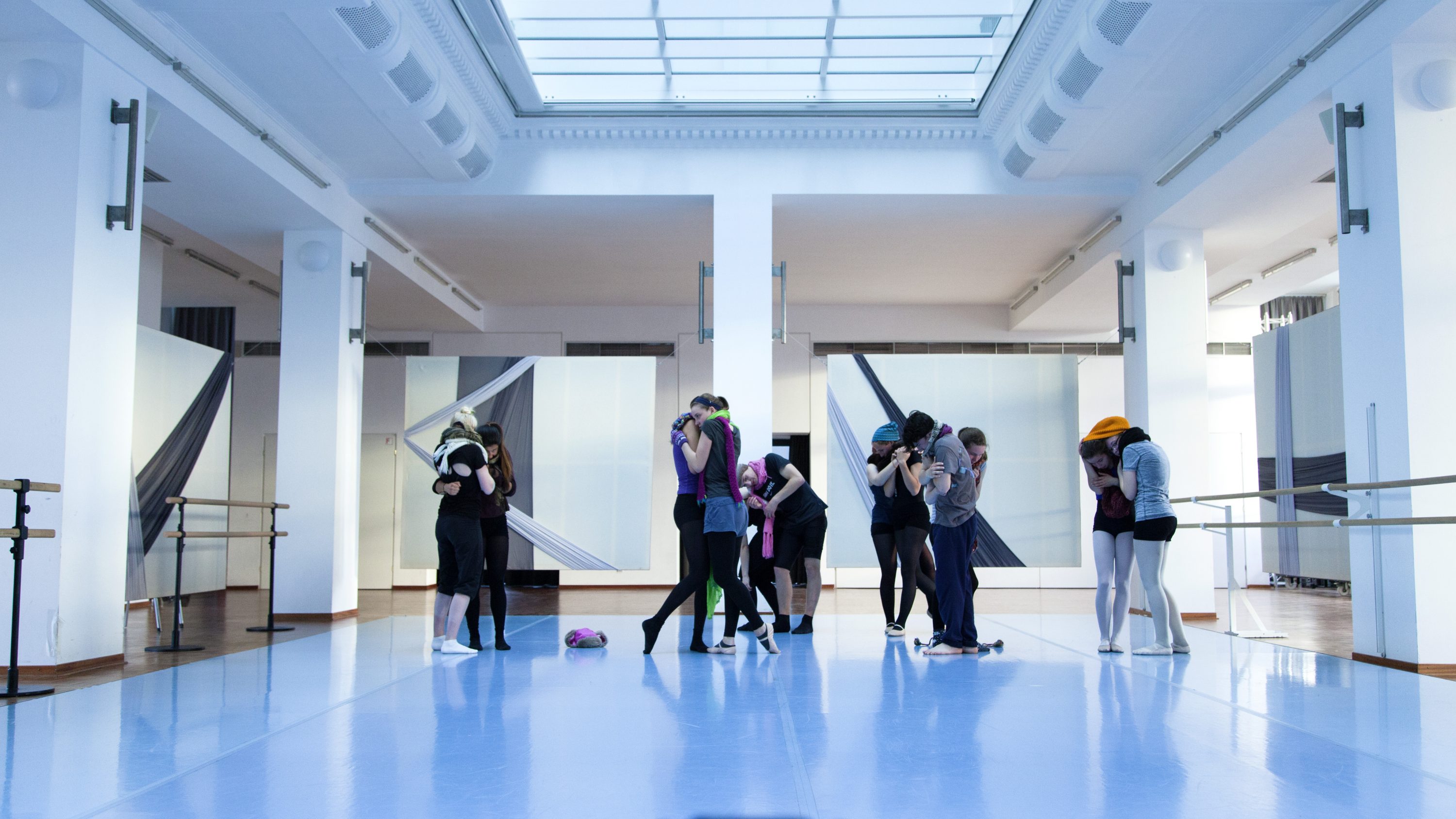 Thematically the performance leads against the backdrop of the Lichthaus and its vicinity through the seasons. The sound compositions accompany the dancers through the 13 stations. Team Raummaschine produced several dance videos for this piece. They were integrated within the dance as well as animation scenes for a choreographic interaction between projection and dancers.

This Project is a cooperation between www.urbanscreen.com & Saatchi & Saatchi. For very illustrious PR Derby event an extra-ordinary large-scale interactive game was developed and realized. The neighbouring and “rival” cities of Cologne and Düsseldorf competed in an classic battle of strength and technique. The projection setup featured 36 projectors with extreme tele lens, which turned two telecommunication towers, the Colonius and the Rheinturm, into giant high strikers. Local companies and school classes were representing the future of digitalization participated in the Digital Derby. The impact of each hammer strike executed on the modul area was visualized through vibrant 3D-animations in real time. 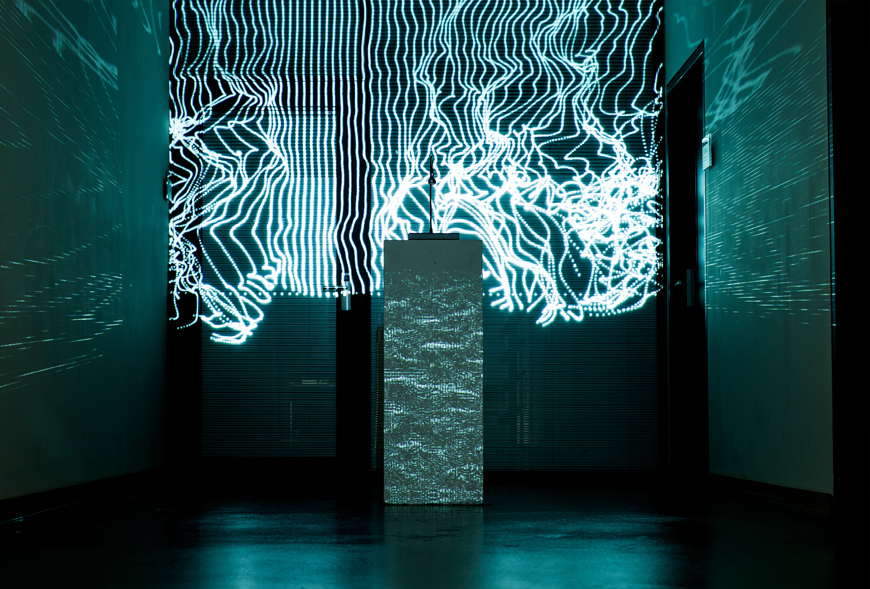 MoodEX 3.08 is a walk-in interactive projection mapping installation and stage.

The installation deals experimentally with room 3.08 at the Speicher XI and tests the effect of different structures. It is simultaneously a stage for the performer, as well as an interactive walk-in installation for the audience. A new audio-visual relationship is thus created between the performer, object and space. Within the performance, the dancer‘s understanding of his changing environment is at the center. The performer reacts to the different situations and movements of the mapping. 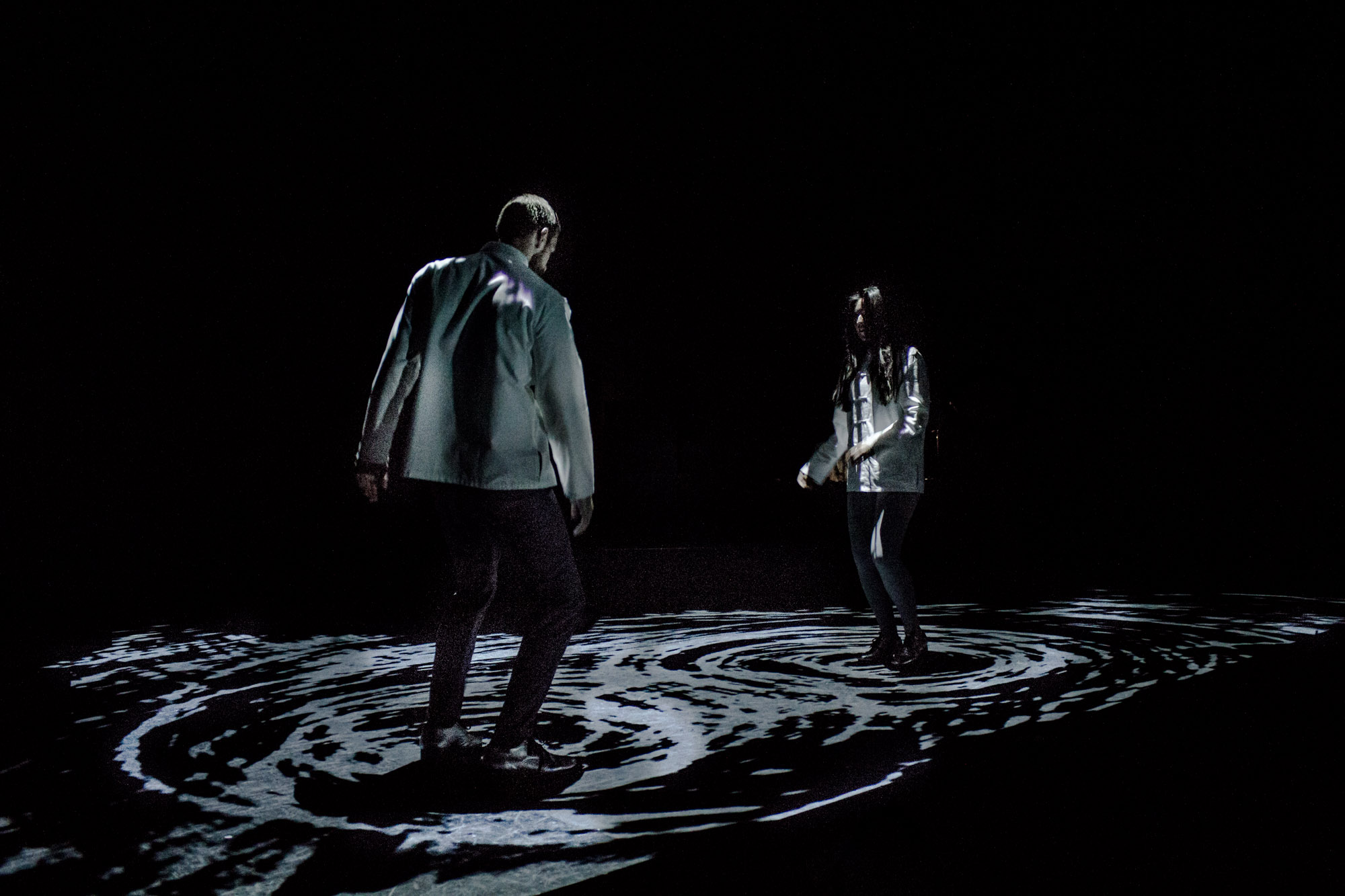 In Tap Dance, the performers act as dancers and musicians at the same time. In cooperation with an advanced Tap Dance ensemble lead by Daniel Luka we extend this symbiosis on the visual and sonic level to create a unique fusion of sound, body and light. 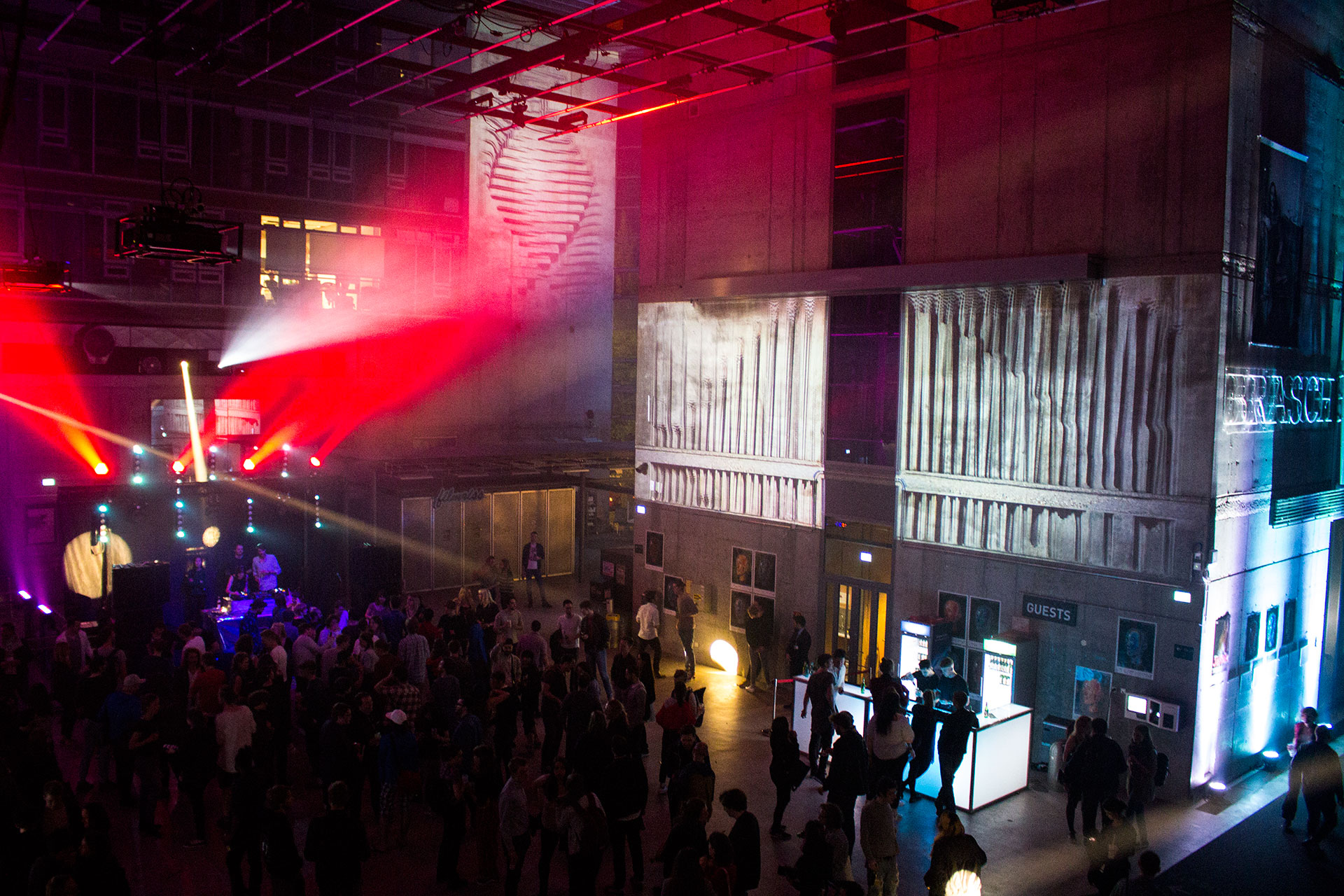 In dynamically transmuting three distinct wall surfaces, the film university’s entrance hall was expanded by projected virtual space — its aesthetics in line with the festival theme METAMORPHOSES. Elements of the corporate identity were adopted and placed in relation to the materiality of the open-pored stone walls the architecture of this famous institute is characterized by. The result is a continuous loop that gives the building a curious life of its own and reflects the multi-faceted character of the place. 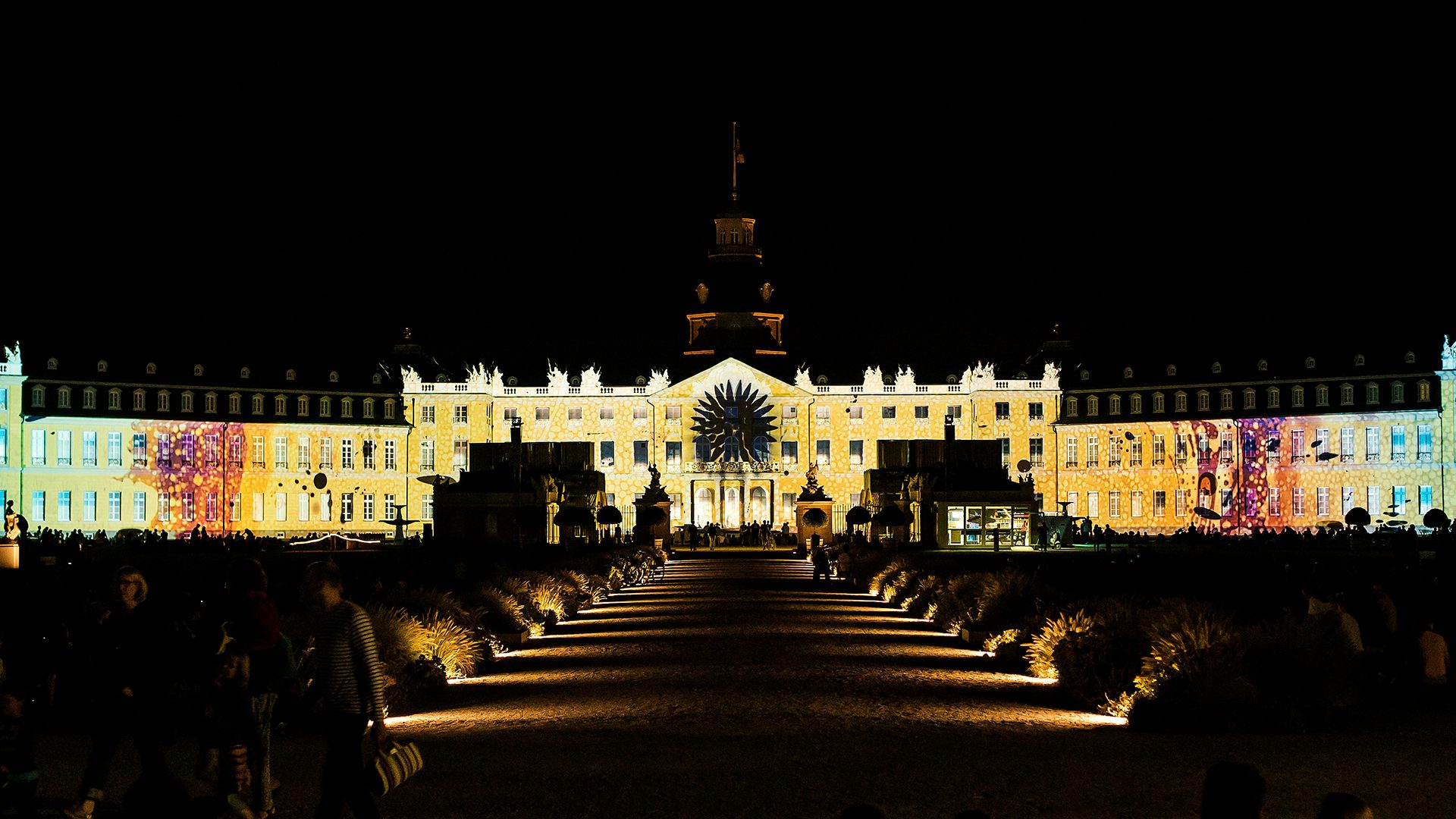 Transkutan‘s projection shows the omniscalar consistency of architecture and body. Here, coherence stands for the similarity of processes which occur equally in microcosmos and macrocosmos. It is found in nature, philosophy, and aesthetics, using the example of the golden section and the congruence of natural and spiritual patterns. 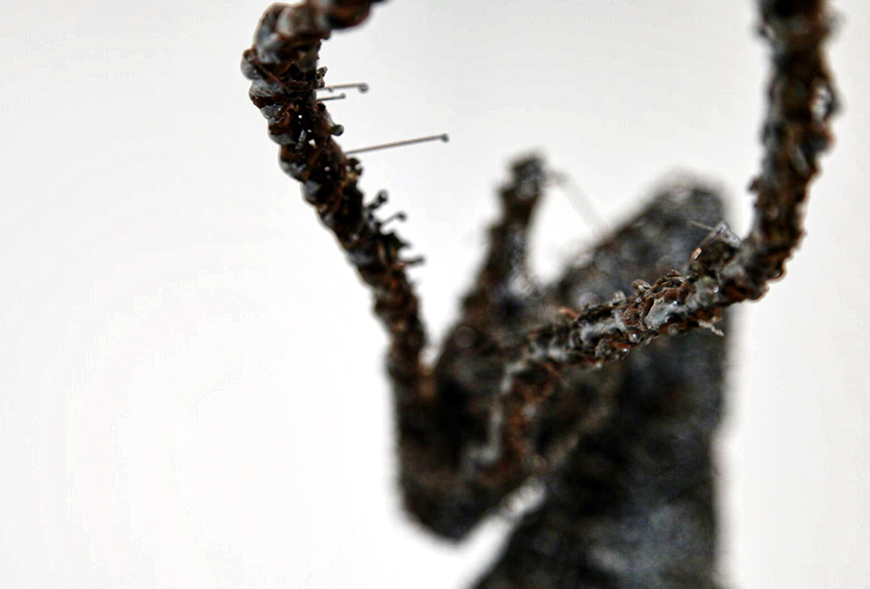 The IFilm shows the great variety of creativity at the University of the Arts Bremen, focusing especially on the current Works of the students. To represent artists and designers is always a great Challenge. Selected projects by students and student performers are the basis of this movie, making it individual, artistic and authentic. The film is intended to highlight the strengths, excellence and peculiarities of the University to potential students, apprentices as well as Scientists here and abroad. 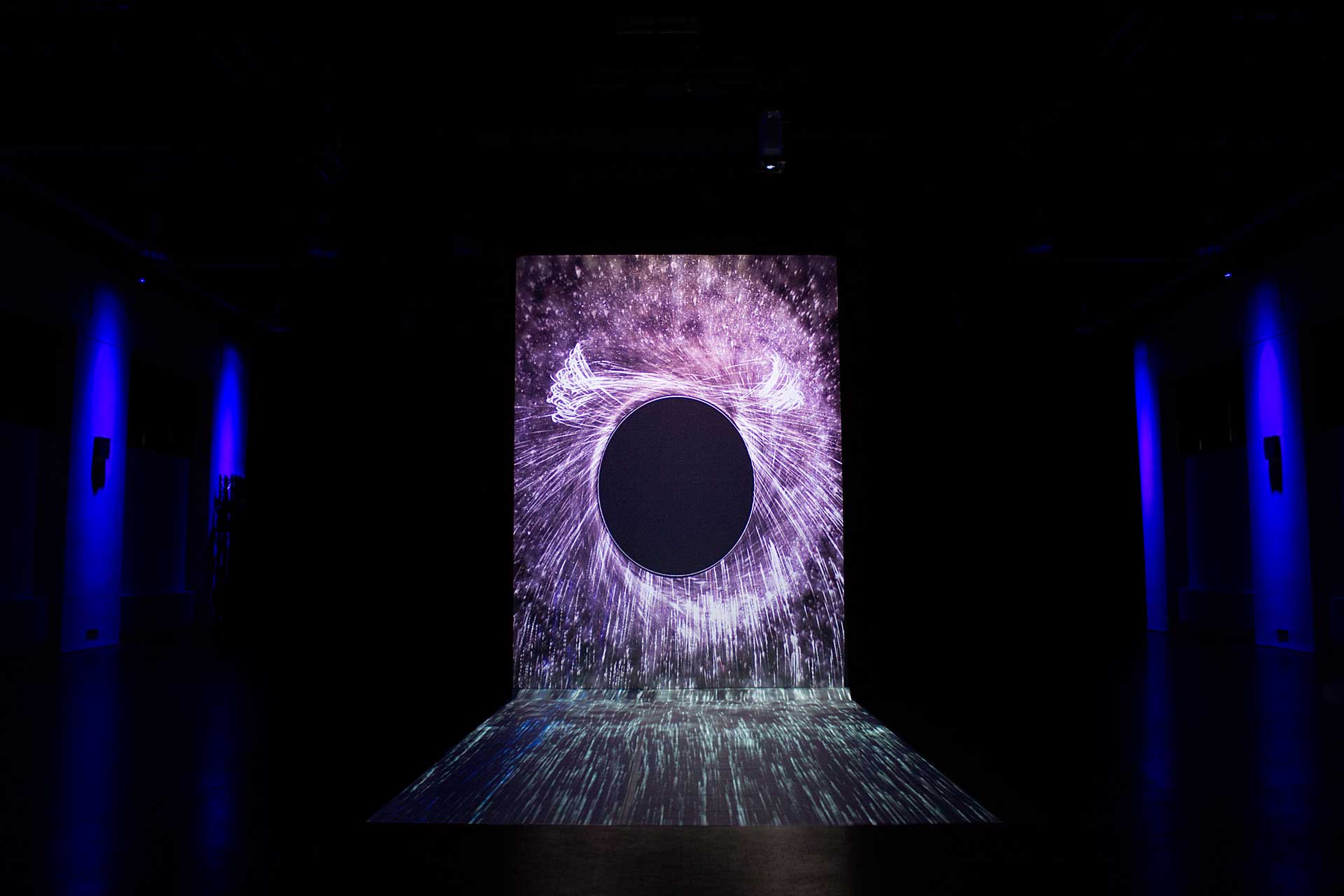 Vortex Lucis is an explorative interactive light and sound sculpture. The sculpture investigates various phenomena and anomalies of light within the domain of black holes.

Black holes do not only attract matter — light, likewise, cannot escape its immense gravitation. Based on the notion that visitors of the installation represent sources of light (and sound) which are being attracted by the vortex in the centre, the installation investigates various aesthetic and atmospheric renditions of this phenomenon. The spectators thus become part of the sculpture and form visual and acoustic events based on their presence in the given space — as an audiovisual simulation of a gravitational field. 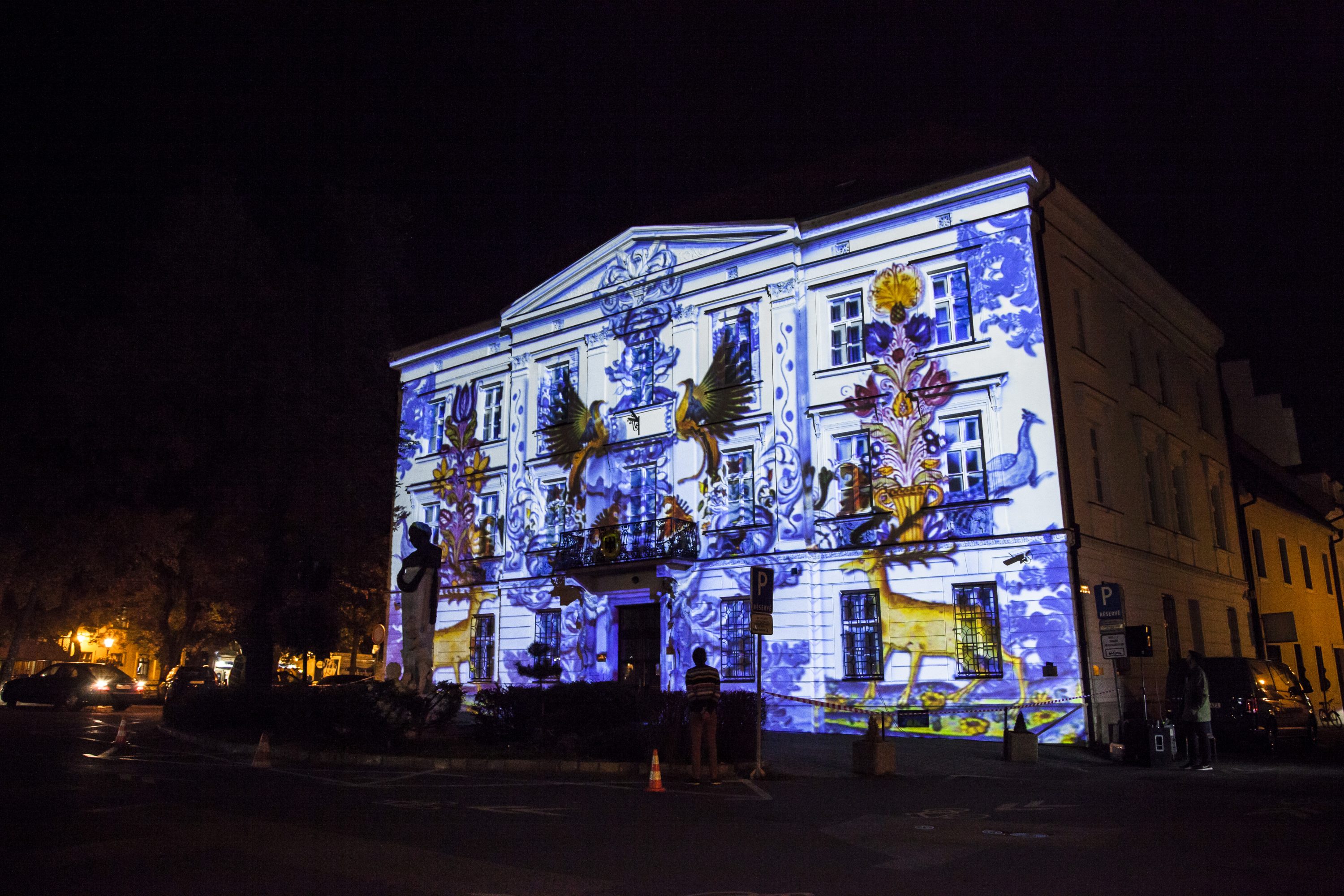 The German embassy hosted the festivities in the heart of Bratislava in the course of the 25th anniversary of German-Slovakian friendship (Slovensko-Nemecký Deň).

The building of the German embassy was the main scene of the event, the magnificent façade of which was artfully staged by an architectural mapping.

Čo Nás Spája (“What Unites Us”) is a reminiscence about the mutual history of both countries as we carried out an aesthetic journey through the geographic, cultural, historical and political relations between them. 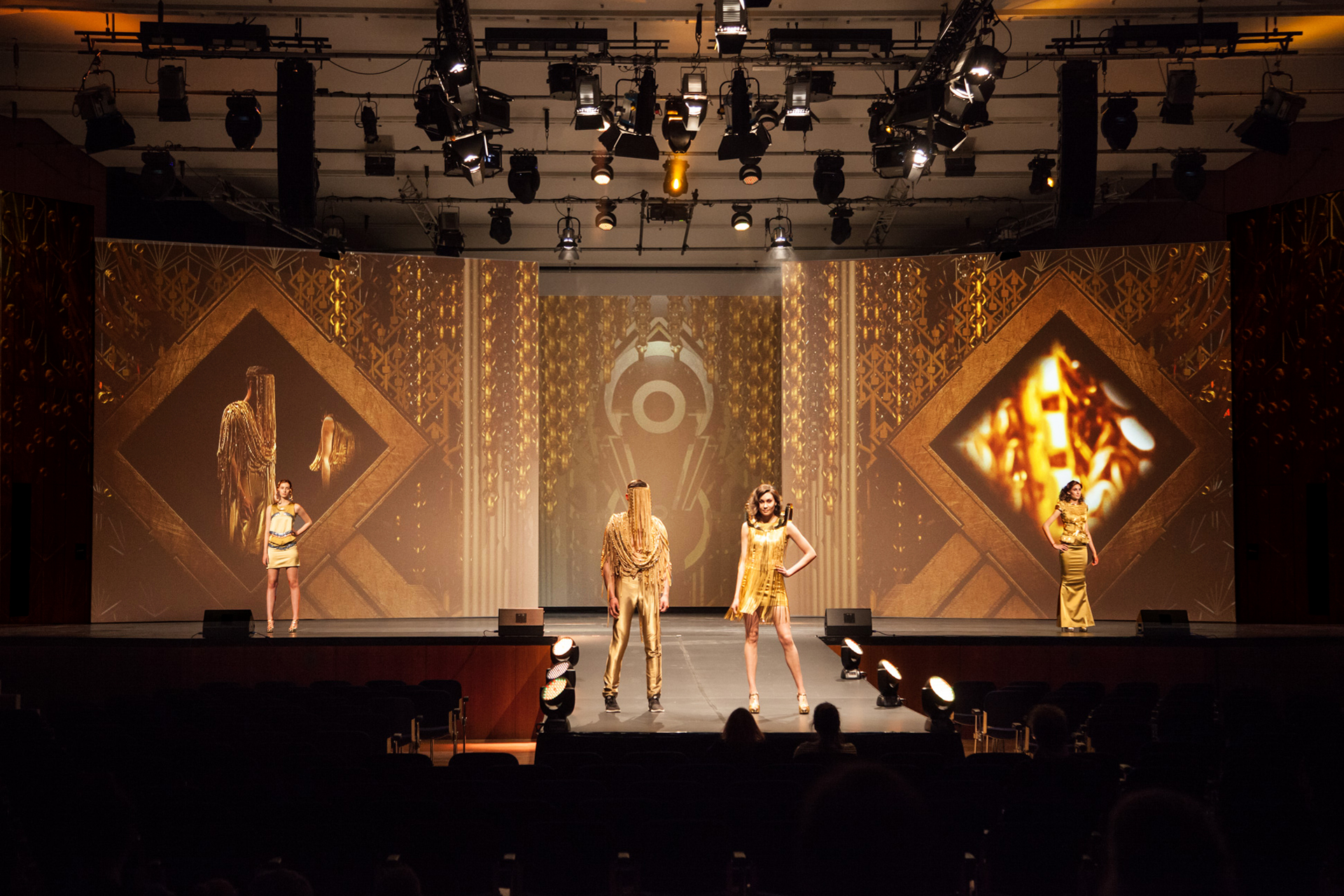 In the year 1767 the margrave Karl Friedrich von Baden granted the city of Pforzheim the exclusive right for gold and jewellery production and this decree therefore layed the foundation for the wealth of the city. For the 250th anniversary of this occasion we accompanied the glamourous celebration gala at the Congress Centrum in Pforzheim with an indoor 270° panoramic projection through several stages. 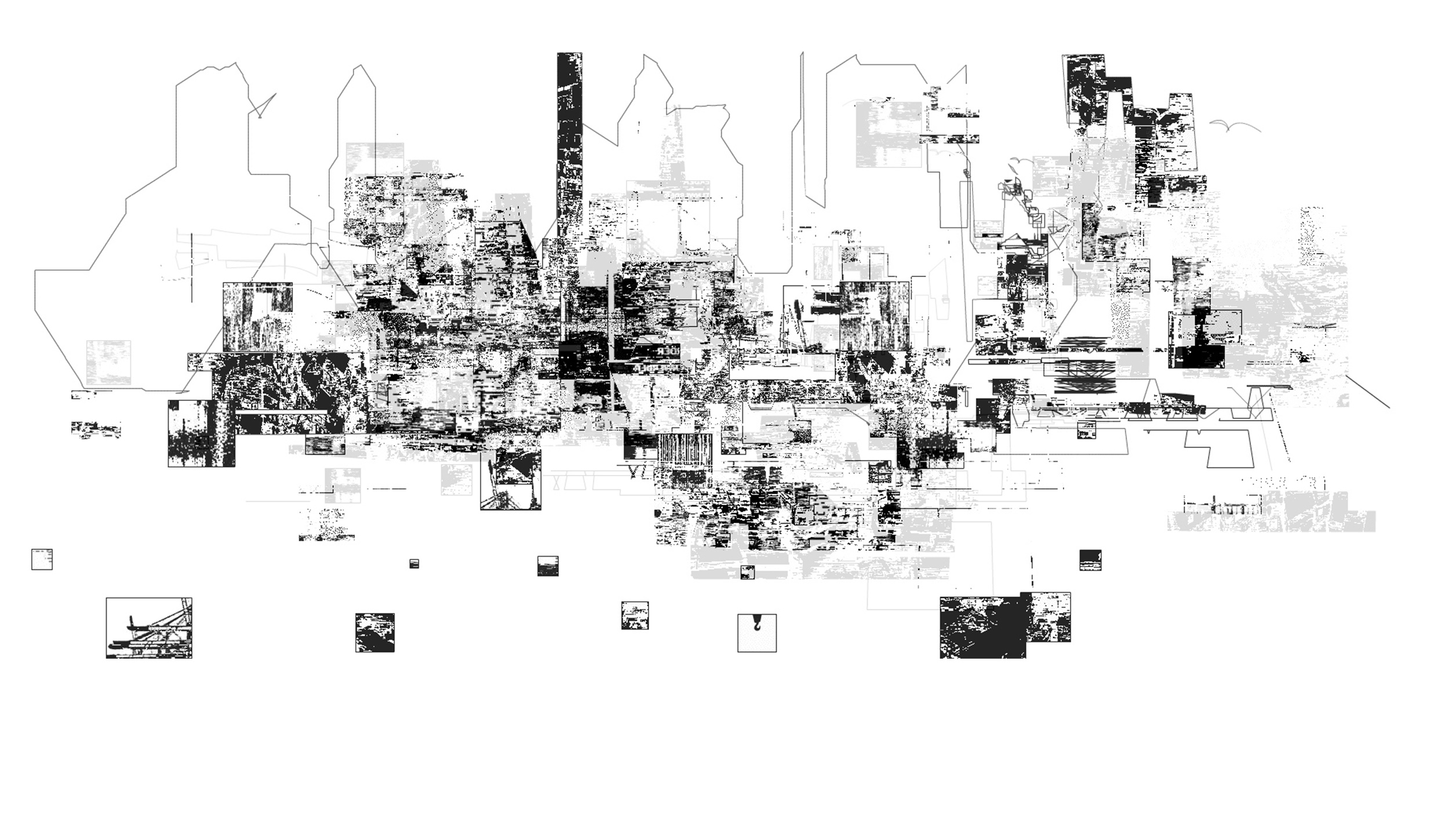 Construct is a synthesis of audio and video material, which influences each other in generative processes. For the basic animation in Flash several photos and vector graphics were animated and expanded with scripted events. Subclips were rendered here and mixed with new generative elements in a further loop. Afterwards the audio track and the video were analyzed in AfterEffects. With the resulting parameters effects were generated and controlled, which allowed an additional chronological composition. 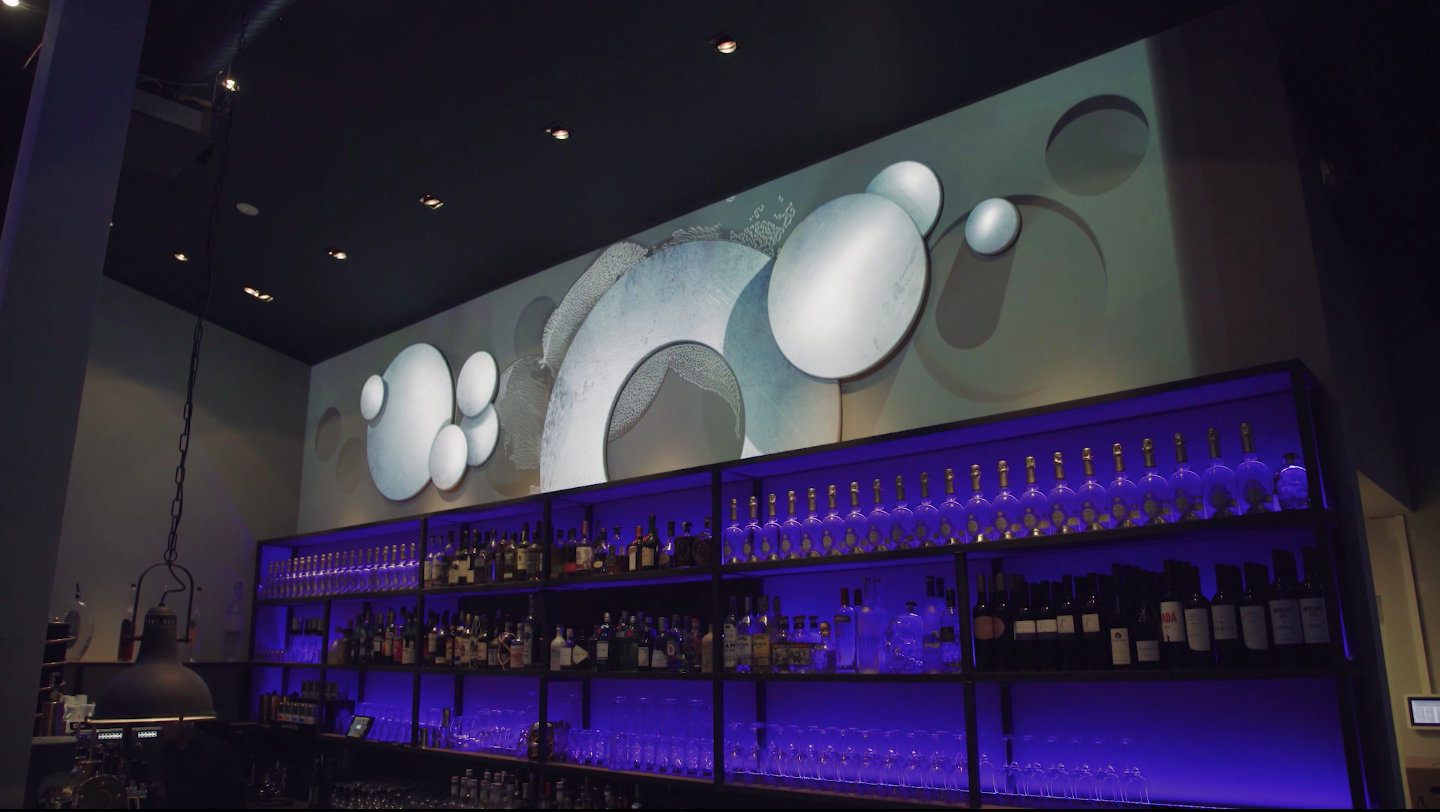 PULVERMÜHLE is an augmented sculpture conceived and built for indoor spaces. The multilayered physical object is nestled on top of the ground surface.

A generated simulation flows softly around the object and reacts to its physical structures with slight nuances of light streaks coming from a different layer of context. 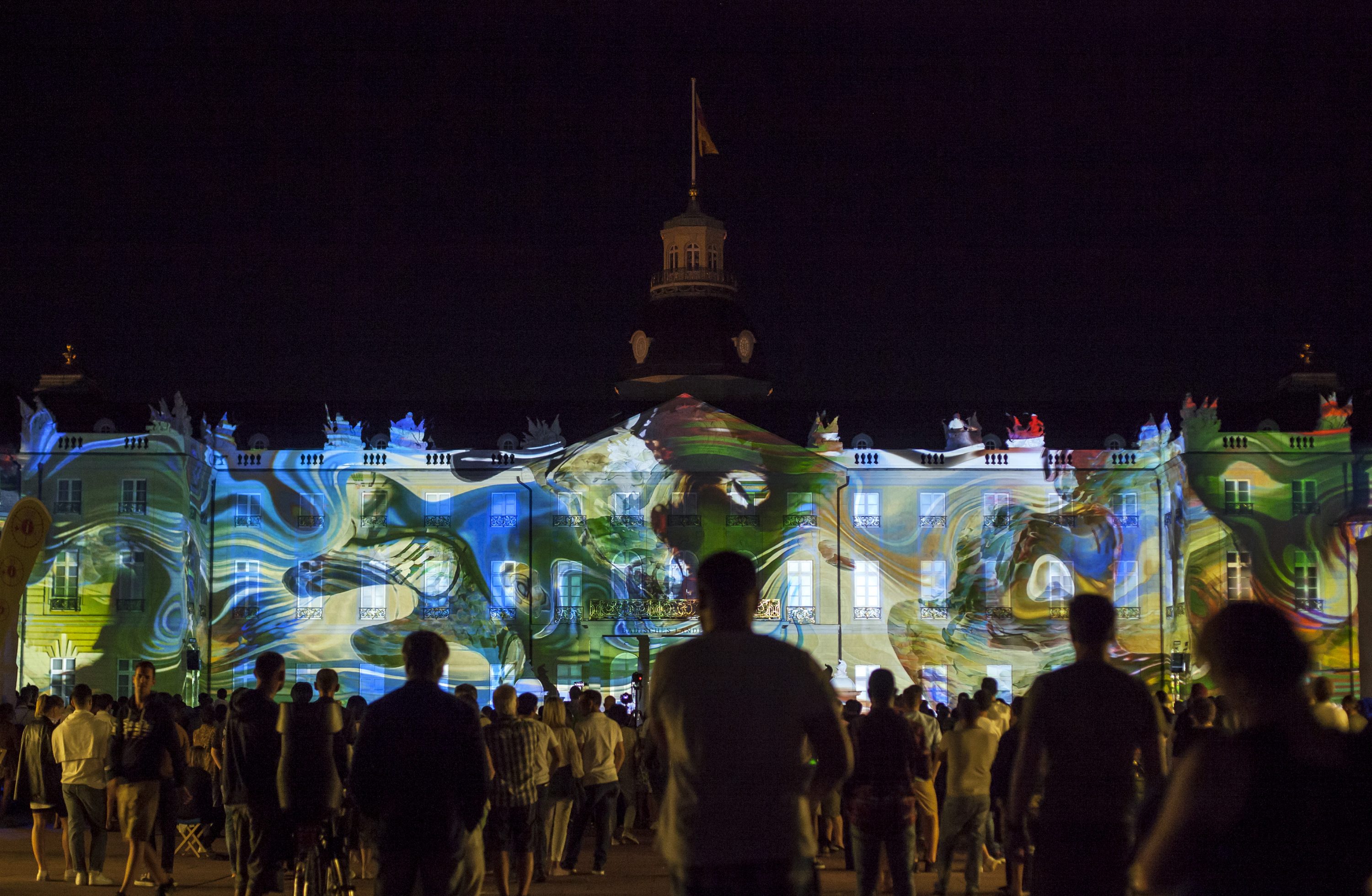 Based on the psychedelic art and philosophy of the 60s, the projection show “Walls of Perception” describes the mind-expanding journey of a fictive protagonist. Influenced by works of OpArt and the progressive and experimental music of this very special time, the projection explores how the Perception of reality and the handling of new media have developed since then and what influence these formative years have developed to date.

Go to Project : WALLS OF PERCEPTION

LATEST NEWSALL NEWS ON MY BLOG 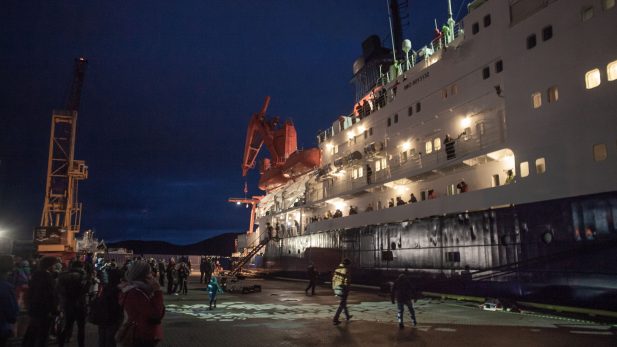 The Mosaic Arctic Drift Expedition Project is the biggest ever realized arctic expedition. Together with 19 other nations, 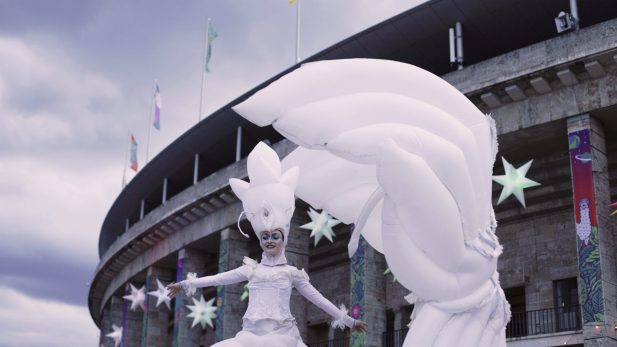 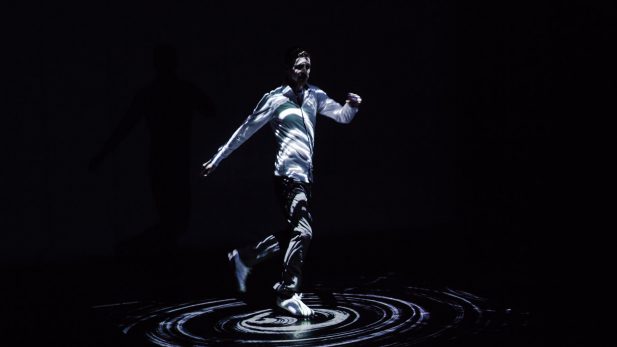 In Tap Dance, the performers act as dancers and musicians at the same time. In cooperation with an